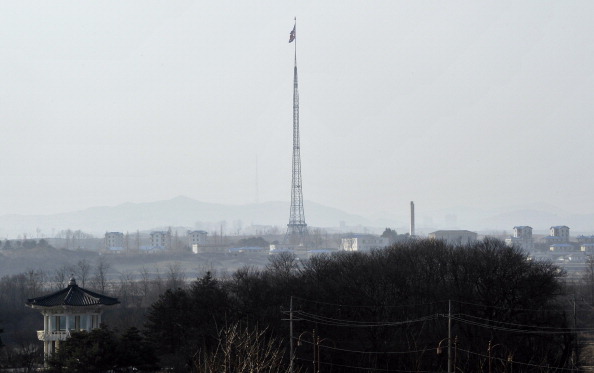 A North Korean flag flutters in the propaganda village of Gijungdong as seen from South Korea's Taesungdong freedom village during a graduation ceremony for Taesungdong Elementary School in Paju on February 16, 2012. (Jung Yeon Je/AFP/Getty Images)
World

Just days after agreeing to a moratorium on its nuclear program, North Korea’s young leader, Kim Jong Un, is threatening to conduct “its own-style sacred war” against South Korea.

On Sunday, around 150,000 civilians and military personnel attended a rally broadcast over television in the North Korean capital of Pyongyang to denounced South Korea.

The anti-South Korea outburst was prompted by a South Korean army unit in Incheon allegedly writing defamatory messages about the late Kim Jong il and his son and successor Kim Jong Un, under portraits of the two men.

KCNA then ran a vitriolic statement by a spokesman for the Supreme Command of the Korean People’s Army, Kim Jong Un, in its English language edition on Friday carrying the headline, “Strongest Warning Served to Those Who Hurt Dignity of Supreme Leadership.”

“The Lee Myung Bak group committed a thrice-cursed high treason without hesitation. The units of the puppet army openly slandered and defamed the dignity of the supreme leadership,” the statement said.

“The Supreme Command of the Korean People’s Army, … solemnly declares once again that it will indiscriminately stage its own-style sacred war to wipe out the group of traitors,” it continued.

He also took the opportunity to assail the United States for holding joint military drills with South Korea.

“The war drills now under way by the Lee Myung Bak group of traitors and the U.S. imperialists have touched off towering grudge of the army and people of the DPRK.”

Kim toured the border town of Panmunjom and told the soldiers there to be on maximum alert.

“The Lee Myung Bak group is the sworn enemy with whom Koreans can never live under the same sky and the warmongers of the South Korean army are gang of traitors to be wiped out with arms,” read the statement.

Last week, North Korea agreed with the United States to place a moratorium on its nuclear weapons program in exchange for food aid. The isolated communist country is in desperate need of outside aid to feed its people following a series of crippling famines in the 1990s and in recent years.