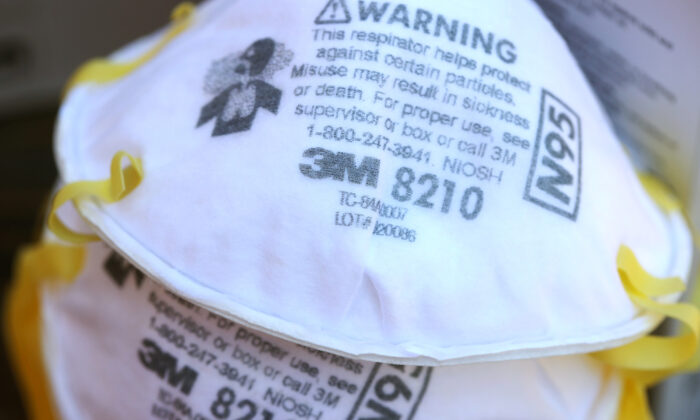 Americans should be wearing N95 masks for greater protection against the highly contagious COVID-19 Delta variant, according to Dr. Scott Gottlieb, former head of the Food and Drug Administration (FDA).

Gottlieb told CBS News’s “Face the Nation” on Sunday that the quality of a mask matters in protecting against the strain, which was first identified in India in late 2020, and currently makes up approximately 83 percent of all new sequenced COVID-19 cases in the United States, according to federal officials.

“If you’re going to consider wearing a mask, the quality of the masks does matter,” he said. “So if you can get your hands on a KN95 mask or an N95 mask, that’s going to afford you a lot more protection.”

Experts say that medical-grade respirators such as N95 masks offer greater protection against more infectious strains of COVID-19, such as Delta, which is believed to be more transmissible than other versions. It is also now the dominant variant of the CCP (Chinese Communist Party) virus worldwide.

Compared to more commonly worn surgical masks or cloth face coverings, when worn properly, N95s fit more closely to the face and provide at least 95 percent protection level against airborne viruses, according to the Centers for Disease Control and Prevention (CDC).

Meanwhile KN95s, which work similarly to N95 masks, are regulated by Chinese authorities. They were authorized by the CDC as a suitable alternative for N95s due to shortages during the onset of the pandemic last year, although some have since raised concerns that the majority of non-certified KN95 masks from China do not meet U.S. standards for effectiveness.

In early 2020, at the start of the CCP virus pandemic, Americans were not advised to wear masks, which later led to confusion regarding mask policies.

Former White House deputy national security adviser Matthew Pottinger told CBS News’ “Face the Nation” on Feb. 21 that U.S. officials had made the “grave misstep” of approaching the CCP virus as if it were a flu, which delayed the mask-wearing advice for Americans.

“Initially, at the outset of this epidemic, we were encouraging people not to use N95 masks because there weren’t enough of those masks for medical workers. Now, there’s plenty of masks,” explained Gottlieb on Sunday.

“There are plenty of N95 masks in the system. The Biden administration has done a good job ramping up supply,” he said.

“There’s also KN95 masks available,” he said of the China-made masks.“So I would encourage people to look at the quality of the mask and try to get their hands on a better quality of mask.”