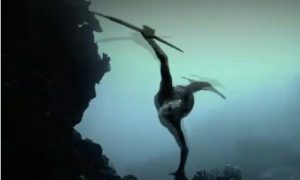 Mermaid mockumentaries have capitalized on people’s innocent curiosity, influencing America’s cultural subconscious; however, there are historical, mythical, and perhaps even scientific components to the topic of mermaids.

The origins of mermaids, from the context of human mythology, can be traced back to a cave painting done 30,000 years ago during the late Paleolithic Era, according to the National Oceanic and Atmospheric Administration (NOAA).

Nearly every culture on the planet has its own belief in mermaids. The ancient Greek poet Homer wrote about beautiful women of the sea, called sirens, who had the lower body of a fish and who would lure ancient sailors to their doom with their siren song.

In ancient Eastern cultures, mermaids were the wives of sea dragons, and they served as messengers between their husbands and the Emperors in the human world.

Even the aborigines of Australia believe in mermaids; they call them yawkyawks. The unusual name refers to the mesmerizing songs that they sing.

Despite mermaids’ mythological heritage, scientists have yet to find evidence of them, according to the NOAA.

But a radical theory suggests that human history may be more scientifically related to mermaids than initially thought. The theory is called the ‘aquatic ape theory,’ which gained popularity during the 1970s and ‘80s but lost credibility due to heavy criticism.

The theory suggests that humans in fact did not evolve from land-dwelling apes but instead came from prehistoric marine mammals. The theory attempts to explain anomalies about evolutionary characteristics, but it remains controversial and is largely ignored in educational settings.

In any case, mermaids continue to pervade conspiracy theories, and they persevere in America’s cultural subconscious.