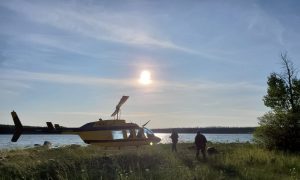 TMZ posted the footage on its website and on YouTube, showing the run only, just before the crash, across Oregon’s Alvord Desert. She was attempting to break her own record in a jet car before the incident last week.

Combs, a racer and former “MythBusters” host, tried to break the record for women, which stands at 512 mph. She was reportedly trying to reach over 600 mph.

Lieutenant Brian Needham of the Harney County Sheriff’s Office said his office is investigating the cause of the crash.

Combs, from California, was pronounced dead at the scene of the crash.

“So I don’t know how to say any of this but it all needs said,” her boyfriend, Terry Madden, wrote. “I have never loved or been loved by anyone as much as this amazing woman [Jessi Combs] she was truly my unicorn and I enjoyed every single minute that I had with her. She was the most amazing spirit that I have ever or will ever know.”

He continued: “I’m not ok, but she is right here keeping my going-I made her a promise that if this didn’t go well that I would make sure and do good with it, please help me with that, you are all going to see things on news please believe non of them.. we the family have drafted a release and it will come out today with more proper info, but I was just woke up by the media tracking me down and I need everyone of her true friends to do what she would want ‘take a deep breath, relax’ and do good things with this.”

Before she made her attempt, Combs wrote on Twitter about her attempt to break the land-speed record.

“It may seem a little crazy to walk directly into the line of fire… those who are willing, are those who achieve great things,” she tweeted. “People say I’m crazy. I say thank you.”

“Jessi was known for her bright smile, positivity, and tenacious pursuit of the fulfillment of her dreams. Her drive was infectious, and she served as a role model for young Girls, and Women around the world. People that loved her and followed her became family, all bonded together by adventure and passion. Her fans adored her, and she lived to inspire them. Jessi’s most notable dream was to become the fastest woman on Earth, a dream she had been chasing since 2012. Combs was one of the rare dreamers with the bravery to turn those possibilities into reality, and she left this earth driving faster than any other woman in history,” her family said, according to Autoblog.