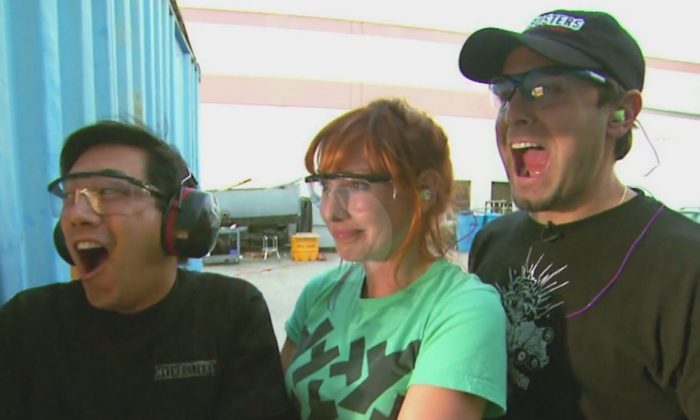 MythBusters stars Kari Byron, Tory Belleci and Grant Imahara are leaving the show, according to reports on Friday.

Adam Savage and Jamie Hyneman made the announcement that the three won’t be returning after the Aug. 21 episode.

“I guess you guys are finding out the news right about now. After a decade of the MythBusters, we are no longer with the show,” Byron said, according to E! News. “Thank you to all the fans who have supported us. The show is taking a new direction. It was an amazing run. I learned so much about myself and the world. I love you all @MythBusters. I am sad for an ending but there will be exciting new adventures for us.”

Imahara added: “Thanks @MythBusters for allowing us to teach science in a whole new way. Also, explosions. Now, on to the next adventure!”

Bellici wrote on Twitter: “It’s been an amazing ride for 10 years! We couldn’t have done it without you guys. You’re the best fans anyone could wish for. Thank you.”

Adam Savage also said, “@KariByron, @grantimahara & @ToryBelleci, it’s been a pleasure to not only work with you but call you our friends.”

Discovery posted a final clip of the three stars, saying “It’s the end of an era. Thank you, Kari Byron, Grant Imahara and Tory Belleci, for your INCREDIBLE work over the last 10 years.”

Judging by the tweets, the parting appears to have been done amicably.

A spokesperson with the Discovery Channel did not elaborate to Fox News as to why the three are leaving.

“Kari, Tory and Grant have been an incredibly important part of ‘MythBusters’ for over a decade,” a spokesperson said in an email. “From explosions to car crashes to even more explosions, this trio has helped shape ‘MythBusters’ into the Emmy-nominated series it is today. Everyone at Discovery wants to thank them for their tireless work busting almost 1000 myths, and we wish them all the best on their future endeavors.”

The three stars also didn’t say why they were leaving.