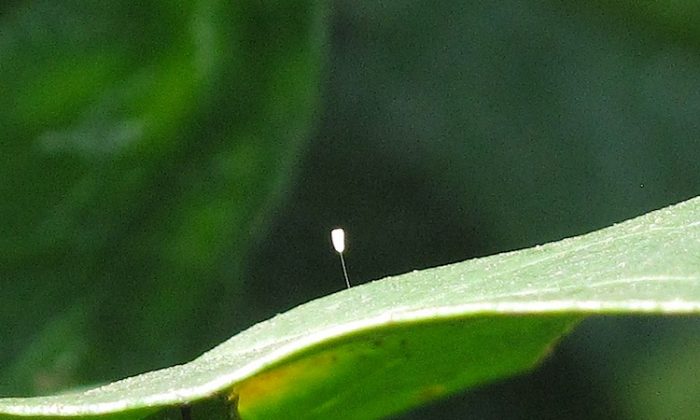 The legendary Udumbara flower, described in Buddhist sutras, was spotted blooming in a La Puente, Calif., backyard by a Buddhist follower at the end of October. The tiny white blossom is said to appear only about every 3,000 years, heralding the appearance of a holy person on earth.

Tony Fu, a devoted Buddhist originally from Taiwan, said that since he began to study the Buddhist scriptures in 2000, he occasionally hears objects around him talking to him, a phenomenon in keeping with the Buddhist faith.

Fu has been living in his rental home in La Puente for about six months. There is a guava tree in the backyard, which he frequently checks on to see if the fruit is ripe. A few weeks ago, while checking the fruit, he heard the guava tree say that it was thirsty and asked him to water it. Worried that his landlord would complain about his wasting water, Fu only watered the tree a little bit.

“The second time I watered it, I heard the guava tree say that if I water it again, it will show me something good,” Fu told The Epoch Times during an interview on Nov. 3.

Fu thought that it meant the guava fruit would be ripe and ready for eating.

But when he checked the fruit again a few days later, he saw a white spot on one of the leaves. At first he thought it was a bug and was a bit shocked, Fu said. But then he realized that it was a tiny white flower.

At once, he remembered seeing a report about Udumbara flowers and checked online for it. Fu found that the tiny flower in his backyard was indeed an Udumbara flower. He was overjoyed and considered it an auspicious sign and a great blessing.

According to Buddhist scriptures, Udumbara is a Sanskrit word that means auspicious flower from heaven. Volume 8 of the Buddhist “Huilin Phonetics and Interpretation” scripture says: “Udumbara is the product of ominous and supernatural phenomena; a celestial flower, not of the mundane world. If a Tathagata or the King of the Golden Wheel appears in the human world, this flower will manifest due to their great virtue and blessings.”

Udumbara flowers have been reported growing on a variety of surfaces, including plants, metal, and glass. They often appear in small clusters, with each leafless, hair-like stem supporting a tiny bell-shaped blossom.

The first time they were seen was about 10 years ago, growing on a Buddha statue in a South Korean temple. At the time, many media outlets reported on it, saying that religious Koreans believed these were the Udumbara flowers that were said to bloom only once in 3,000 years.

Sightings have also been reported in several other places in South Korea, including near the Blue House presidential residence.

As reported recently by the Chinese edition of The Epoch Times, a group of Falun Gong practitioners, who often congregate at a spot near the Blue House to let tourists know about the persecution of Falun Gong in China, have noticed many Udumbara flowers blooming in a pine tree. Falun Gong is a meditation practice of the Buddha School. According to one practitioner, Udumbara flowers have been seen on the tree many times, even during subzero winter temperatures.

Over the past years, Udumbara flowers were also seen in many parts of China, with Chinese state media always debunking them as green lacewing eggs. In February this year, many Udumbara flower sightings occurred again in Lushan, Jiangxi Province. This time, Chinese state media reported them as “nonpareils [something that has no equal] from heaven,” but all of the articles were taken off the Internet after a few days