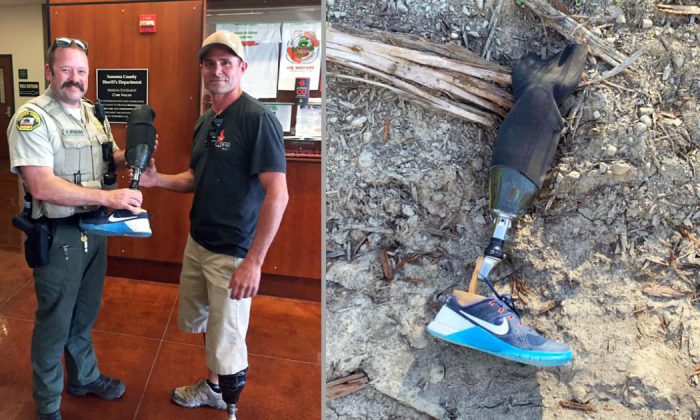 Mystery of the $15,000 Missing Limb in California Is Solved

A northern Californian community has discovered why an artificial leg mysteriously appeared in a lumberyard on April 22.

A Redwood Empire worker made the odd discovery after seeing something shiny on the ground shortly after starting his morning shift at 6 a.m in Cloverdale, 116 miles west of Sacramento.

At first the Redwood Production Manager Micah Smith thought it might be a soda can, but as the sun rose higher, he realized it was actually a prosthetic leg.

He inspected the entire lumberyard and was relieved to find no other body parts. He noticed the leg, which had a sports shoe attached, had a serial number that could be traced back to its owner, and he called the Sonoma County Sheriff’s Office to report the unusual find.

“It was a nice looking Nike [shoe],” Smith said.

A worker at a California lumber yard made an unusual discovery: a prosthetic leg wearing a blue Nike shoe. It turns out that the limb was lost while its owner was 10,000 feet in the air skydiving over the area. https://t.co/ZEm4N98zil

The deputy sheriff gathered the intact leg, checked the area, and contacted the nearby airport, which confirmed a NorCal Skydiving customer had reported the limb as missing.

“Turns out that an amputee went skydiving yesterday and his leg fell off in mid-flight from about 10,000 feet up,” the sheriff’s office said in a Facebook post dated April 22. “After they landed, he and friends looked around the area but couldn’t find it.”

Today we got a strange call of a found prosthetic leg at a Cloverdale lumber yard. The deputy gathered the intact leg,…

NorCal Skydiving Owner Tyler Wareham said the team did everything it could to help find the leg and noticed Callaway seemed to be disappointed after landing and failing to find his leg.

“We understood. We tried to do the best we could [to find it],” he said.

“[We] were able to return his leg this afternoon. Great guy, full of humor who said he lost his first leg in a freak skydiving accident two years ago but that hasn’t held him back,” the sheriff’s office said. “He jokingly quipped that this was his second leg lost while skydiving.”

Callaway was very pleased to recover his limb, which is estimated to be worth $15,000, undamaged and without landing on anyone.

“He promises to make a tether and learn from this but fully plans to stick with his passion,” the sheriff’s office said. “Good luck Dion, great spirit!”

Fortunately, the leg happened to land on top of a somewhat forgiving pile of sawdust at a lumber yard right next door to the airport. When asked if he’d ever go skydiving again, Dion Calloway replied: “Yep. Absolutely. Next weekend.” https://t.co/RCE40qzktR

Smith was also relieved to learn Callaway was alive and well.

“First and foremost I’m glad that was it, it was just a mishap, it wasn’t anything else and everybody is okay,” he said.

Callaway, who has reportedly performed nearly 500 jumps since the year 2003, revealed he and his friends had searched nearby vineyards and properties for a whole day without success.

“I’ve jumped with the prosthetic before but a rush of air got inside this time and it just flew off,” he said. “I tried to watch where it was falling but I was so overwhelmed in that moment I could not keep track.”

Callaway had his limb replaced after making a high-speed landing at Cloverdale Airport two years earlier. At the time he was too low to the ground to use a parachute and ended-up shattering his heel.

He underwent physical therapy and medical procedures for a year before finally deciding to amputate his leg below the knee.

“Skydiving is my everything and the people I do it with are my family,” he said. “I always seem to come back to it.”

Since having the procedure, Callaway has skydived about 20 times and is hopeful he will be able to return to doing weekly jumps.

“I have just learned to be present and have a good time no matter what,” he said.

The 30: Skydiver loses his leg, but is able to recover it pic.twitter.com/NmaGol0iwH