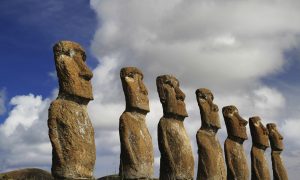 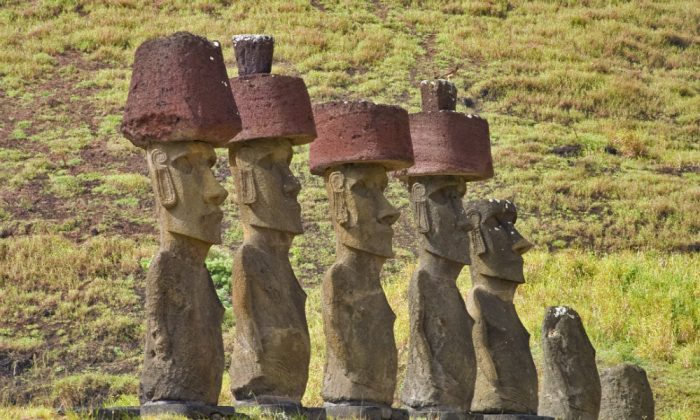 Archaeologists have long debated how the ancient inhabitants of Easter Island managed to balance a separate piece of stone on top of the heads of the famous moai statues that dot the island. Now a team of researchers claim to have the answer.

Easter Island, or Rapa Nui as it is known in the Polynesian language, is a small remote island a few thousand miles west of South America. One of the most interesting features of this island is its 887 giant monolithic statues named moai. While the initial name of the island was considered to be “Te Pito O Te Henua,” which means the Navel of the World, it was renamed in 1722 when the Dutch explorer Jacob Roggeveen arrived there and has been known as “Easter Island” since.

The moai statues of huge male figures on average are 13 feet high (3.9624 m) and weigh 14 tons (12,700 kg). They are made of compressed volcanic ash. Many believe the statues held a sacred role in the Rapa Nui people’s lives and may have been ceremonial conduits for contact with the gods.

A number of the moai statues found on the island also have pukao, the name given to the hats or topknots placed on top of the heads, which may have represented dressed hair or headdresses of red feathers worn by chiefs throughout Polynesia.  They are cylindrical in shape with a dent on the underside to fit on the head of the moai and a boss or knot on top. The pukao was balanced as a separate piece on top of the head of a moai. For many years it has not been known how they were raised and placed but theories include them being raised with the statue or placed after the statue was erected.

According to a new study, the pukao were rolled up ramps into place. Live Science reports that researchers used “simple physics to model the force and torque required to place the pukao atop the moai via different techniques, such as rolling the objects up a ramp to the top of the statues, building a giant tower, and using a pulley system, or erecting the pukao and moai simultaneously.”

Co-author of the study Sean Hixon, an undergraduate student in archaeology and geology at the University of Oregon, who presented his findings at the 80th Annual Meeting of the Society for American Archaeology, said that rolling the headgear “would have been a relatively easy matter” and could have been done by less than ten people.

Hixton added that other features support the rolling theory of placement, including indentations at the bases of the hats and their oblong shape.  The shape would have had an advantage over a circular cross-section as it would have prevented the pukao from rolling down the ramp by accident. Many of the pukao also have ring-shaped indentations and vertical scratches on the sides, which could have provided traction as the hats were being rolled up a ramp.

Nevertheless, Hixton admitted that the research is far from conclusive and that any of the other theories regarding their placement could also be valid, as research showed that all the proposed methods were theoretically possible with enough people.

Easter Island was settled around 300 A.D. by Polynesians and, between the 10th and 16th centuries, the island community expanded steadily, with settlements set up along practically the entire coastline. However, following this period, the population took an extremely rapid decline dropping from 15,000 to approximately 2,000. For many years it was believed that this was due to an economic and social crisis in the community caused by environmental deterioration. However, more recent research has drawn this belief into question and has demonstrated that population decline only occurred after the arrival of Europeans.