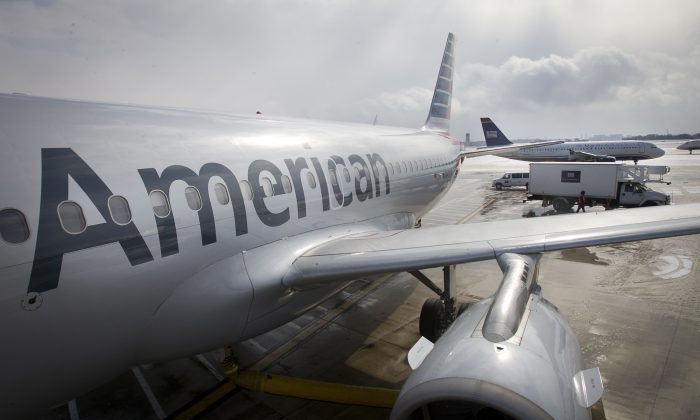 In this Feb. 26, 2014 file photo, an American Airlines Airbus A319 is parked at a gate at Philadelphia International Airport as a US Airways plane taxis in the background, in Exton, Pa. (Alejandro A. Alvarez/Philadelphia Daily News via AP)
UK

The welcome into Heathrow earlier! #AA109… What a day! pic.twitter.com/qg0ge99Zvi

One passenger said a flight attendant fainted when the plane was near Keflavik, Iceland.

Passenger Lee Gunn said, “About 2.5 hours into the flight, just as we were passing Iceland, we had a tannoy announcement asking for any doctors, nurses or medical professionals on board to report to the boarding doors to assist with unwell passengers.

“The lights then came on in the cabin and there was lots of commotion.

“I’m a bit of a plane geek myself so thought ‘here we go, Reykjavik here we come’ but it was announced about 20 minutes after we were going to divert back to LHR.”

Some reports said seven people fell ill in all.

The Boeing plane was met by police cars, fire crews, and ambulances when it reached Heathrow.

A spokesperson for American Airlines confirmed the plane was turned around and issued an apology.

“We apologize to our customers for the inconvenience to their travel plans,” the spokesperson said.

A statement from American Airlines added to the Mirror: “American Airlines Flight AA 109, a Boeing 777-300, operating to Los Angeles International Airport (LAX) from London Heathrow, is returning to Heathrow due to a medical emergency.