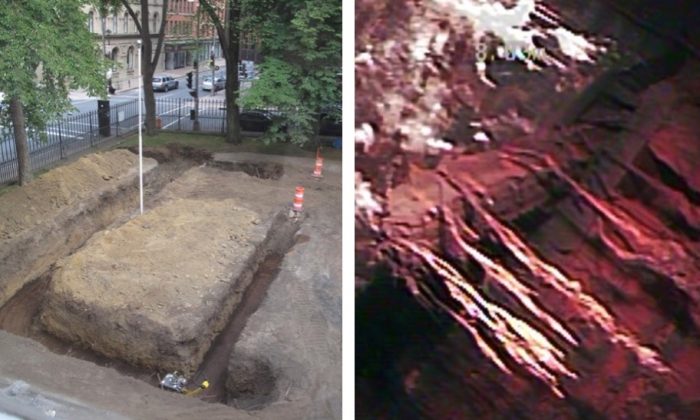 A mysterious underground vault has been discovered on the grounds of a government building in the Canadian province of Nova Scotia.

Crews digging up parts of the Nova Scotia Legislature grounds last summer as part of a renovation project discovered an astonishing “subterranean stone-walled feature” about the size of a living room, according to a report by CBC.

Principal archeologist April MacIntyre, who supervised the monthslong project to revitalize the Province House garden, told the news outlet that the find was completely unexpected.

“There’s no record of anything of that nature being here on the property,” she said. “No indications on maps or any records that we’ve been able to find.”

“It was a total surprise to the archaeologists and the construction crew,” she added.

MacIntyre said she and the members of the construction crew trying to break up what appeared to be bedrock with a backhoe when they made the discovery.

“What we discovered was an open, dry-stone-laid chamber with a semicircular, vaulted-type roof,” she said.

She described the chamber in a report as “a subterranean stone-walled feature measuring approximately 6 meters [19.7 feet] north-south by 4 meters [13.1 feet] east-west and approximately 3 meters [9.8 feet] high to the top of the silt that has collected on the floor.”

During the 2018 garden revitalization project, underground structures, artifacts, and old foundations were found on the grounds. #ProvinceHouse200 pic.twitter.com/nXazmjR13w

No one was unable to enter the vault due to safety concerns, and the only access to examine what was inside was through the hole made by the backhoe.

MacIntyre had about 48 hours to examine the chamber using remote cameras.

A stoneware bottle and ceramic tiles were found on the structure’s vaulted roof, which, according to the report, date back to the 18th or 19th century.

MacIntyre said it is unclear what the room was used for, but believes it may have served a military purpose.

“The chamber was not fully explored during the revitalization project, though its construction and dimensions suggest it may have functioned as a powder magazine, perhaps during construction of Province House in 1811 to 1819,” said MacIntyre, in a report to Canadian government officials. “Artifacts on top of the feature date to the very late 18th to first few decades of the 19th century suggesting it was exposed and/or constructed during that time.”

So far, the excavation work has unearthed a total of 1,534 objects, the CBC reported.

Structural features revealed in the course of excavation include stone walls, a coal chute, and drain pipes.

“Future interpretive endeavors may also be possible and may include further archeological excavation of the feature, though it is believed to be stable at this time and, therefore, essentially mitigated,” she wrote in her report.