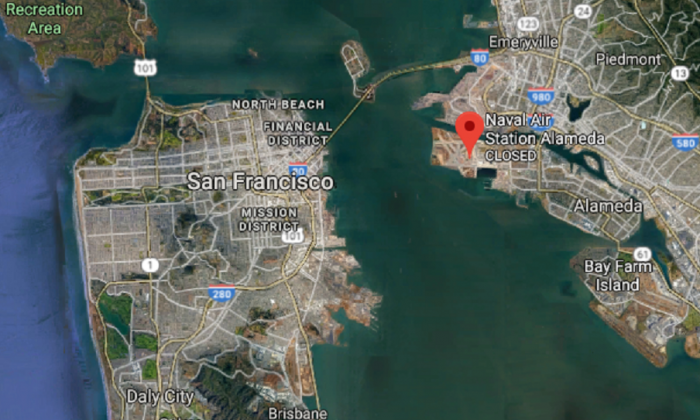 Mysterious Rocket Spotted on Former Navy Base in California

A rocket that was recently spotted on a closed Navy air base in Alameda, California, right across the bay from San Francisco, has piqued the interest of locals, ABC7 reported on Feb. 16.

Yes, that’s a rocket. And yes, it was just tested a stone’s throw from some of Alameda’s finest drinking establishments. pic.twitter.com/JVftjRrWvf

The rocket was noticed by people living in the vicinity of the Alameda Naval Air Station, which was closed in 1997.

“I heard helicopters, and when I look behind me, I see a giant truck with a huge missile on it,” said Faction Brewing employee Madeleine Tonzi.

The truck was moving the rocket from a runway toward a building where the Navy used to test jet engines.

According to ABC 7, the startup company that developed the rocket doesn’t even have a name yet.

When ABC7 tried to call the developer of the rocket, a person answered the phone with, “Stealth space!” But that doesn’t seem to be the official name of the company.

A representative told the outlet that it’s an aerospace research and development startup with about 100 employees, but wasn’t ready to reveal more.

The 40-foot rocket, called Astra, is supposed to carry payloads of up to 220 pounds to space—a miniscule amount compared to competitors like SpaceX Falcon Heavy (over 123,000 pounds), but suitable for a new generation of small satellites, according to a lease application filed with the City of Alameda accessed by ABC7.

It seems the company performed a ground test of the rocket at the base, which left black char marks on the concrete. The company said it works with local government agencies and the Navy. It wants to develop the base into a space technology hub.

“There’s a low rumble echoing through the Twitterverse… And it’s emanating from the site of a mysterious rocket test we spotted on Friday,” reporter Jonathan Bloom commented on Twitter.

There’s a low rumble echoing through the Twitterverse… And it’s emanating from the site of a mysterious rocket test we spotted on Friday… https://t.co/42BCjonZrZ