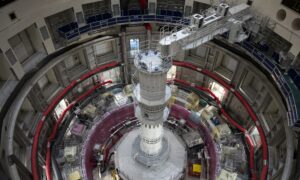 Mysterious Oumuamua Space Object Could Be ‘Lightsail’ Sent From Another Civilization: Study

The mysterious Oumuamua object that was spotted in the Solar System could be “a lightsail of artificial origin,” according to a Harvard study published earlier this month.

“Considering an artificial origin, one possibility is that ‘Oumuamua is a lightsail, floating in interstellar space as a debris from an advanced technological equipment,” researchers said in the paper (pdf) on Nov. 1. It noted that the object had “peculiar acceleration” through space.

“Such an acceleration is naturally expected for comets, driven by the evaporating material. However, recent observational and theoretical studies imply that ‘Oumuamua is not an active comet,” the researchers said.

NASA previously said the object, which is about 1,300 feet in length and 131 feet in width, is a “metallic or rocky object.” The object has a “comet-like density” and a dark red surface, NASA stated, according to reports in September.

But the Harvard study continues: “Lightsails with similar dimensions have been designed and constructed by our own civilization, including the IKAROS project and the Starshot Initiative. The lightsail technology might be abundantly used for transportation of cargos between planets or between stars.”

The study suggested that the object likely left its original home millions of years in the past and was “ejected during planet formation and migration.”

A lightsail—also called a solar sail or a photon sail—is a proposed method for spacecraft propulsion by using radiation pressure from sunlight.

Oumuamua, the study added, could be a “fully operational probe sent intentionally to Earth vicinity by an alien civilization.” It is, however, “a more exotic scenario,” the researchers said.

“(The red surface suggests) either an organic-rich surface like that of comets and outer solar system asteroids, or a surface containing minerals with nanoscale iron, such as the dark side of Saturn’s moon Iapetus,” NASA’s report said.

Oumuamua is traveling away from the Sun at about 70,000 mph and towards the outer portion of the Solar System, said NASA. “In only another four years, it will pass Neptune’s orbit on its way back into interstellar space,” NASA said in June 2018.

Last year, the space agency noted that it got an “unexpected boost in speed and shift in trajectory” last year.

Since the object is the first interstellar object observed in the Solar System, scientists say it’s difficult to come up with a conclusion.

“Observations point to the possibility that other star systems regularly eject small comet-like objects and there should be more of them drifting among the stars,” NASA stated.

Oumuamua is Hawaiian for “messenger from afar arriving first.”