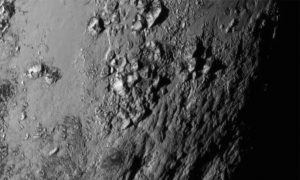 Of the many images that were taken by New Horizons recently, a photo of Pluto’s largest moon Charon reveals a particularly unusual area.

“The most intriguing feature is a large mountain sitting in a moat,” remarks Jeff Moore, a New Horizons team member. He also goes on to say, “This is a feature that has geologists stunned and stumped.”

The agency recently released the close-up photo of the region which is estimated to have been shot from a distance of about 49,000 miles.

The unusual area appears in the upper-left corner of the photo which spans about 240 miles along its vertical frame. It shows a deep depression with a mountain-like land mass rising from the middle of it.

According to officials, there will be better opportunities to study the area once less compressed images arrive back to Earth.