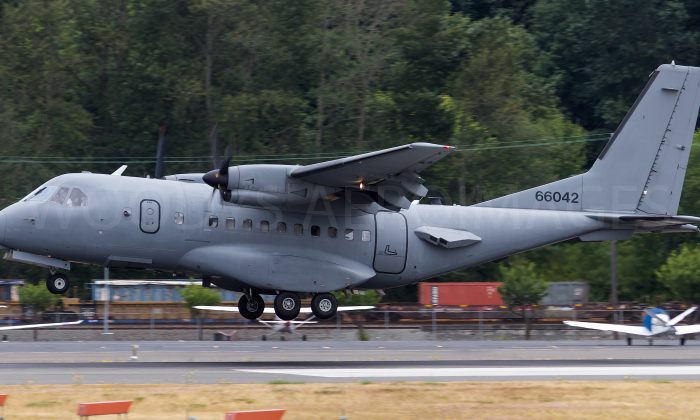 A military spy plane of mysterious origin and purpose had been flying in circles over the Seattle area for almost two weeks.

Starting on Monday, July 24, the plane was flying daily missions, sometimes over 6 hours long, making tight circles over Seattle and the surrounding suburbs. It took a break on Saturday, July 29, and then continued daily flights until Thursday, Aug. 3.

It mostly used the Boeing Field airport in Seattle and the nearby Renton Municipal Airport.

The CASA CN-235-300 transport aircraft has been extensively modified to include advanced communications and surveillance capabilities.

Based on its outward features, it’s been equipped with ultra high-frequency satellite communications, a surveillance system, and other specialized equipment, according to Tyler Rogoway and Joseph Trevithick, The Drive’s military and aviation correspondents.

The surveillance system could be a high-resolution imaging device, but it could also be a wide area aerial surveillance (WAAS) camera.

WAAS systems use many high-resolution electro-optical sensors capable of rapidly snapping pictures of a large area, even a whole city. This allows the user to track anybody anytime within the system’s radius that could be as broad as 6 miles.

“So if a picture is akin to a thousand words, this persistent type of wide area aerial surveillance is equivalent to an entire novel or even a series of novels,” Rogoway and Trevithick wrote.

They tried to determine what the plane’s mission was, under whose command it flew, or at least who the aircraft belongs to. They contacted multiple military agencies, including U.S. Northern Command, Joint Task Force-North, U.S. Air Force Special Operations Command, U.S. Special Operations Command, and the Air Force Life Cycle Management Center. But nobody could answer their questions.

The plane’s only insignia suggests it may be part of a clandestine military unit.

“This particular CN-235, with the serial 96-6042, is one of six that researchers commonly associated with the Air Force’s top secret 427th Special Operations Squadron. Recent pictures of the other aircraft show they are all in relatively similar configurations at present,” Rogoway and Trevithick wrote.

They speculated the plane could have been flying mock surveillance missions as a training exercise. Another possibility is the plane was testing its surveillance equipment on unwitting Washingtonians, “though this could spark serious privacy concerns if true,” the authors wrote.