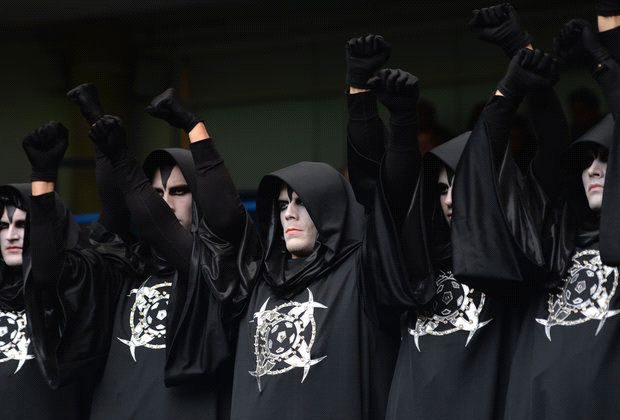 People are getting confused about the mysterious black-robed men who are showing up at professional soccer games, and the mysterious circles that are appearing at spots around the world that are affiliated with the men.

The 11 men dress in black robes with hoods with identical symbols emblazoned on the front of the robes.

UPDATE: Franz Beckenbauer: The men in robes are the aliens, I will assemble a soccer team to face them

Soccer fans saw them making odd, synchronized movements during the Chelsea-Manchester City Game at Stamford Bridge in London on Sunday.

The figures are dressed the same as men who were seen at another game on Sunday, at Juventus Stadium in Turin, Italy; and a soccer match the previous day at the Allianz Arena in Munich, Germany.

The men at times hold up tape with the same symbol as the ones on the robe and with the words “#WinnerTakesEarth.”

Big balls with the same symbols were dropped onto soccer fields at Hackney Marshes in the United Kingdom last week, their formation making up the symbol as seen from the sky.

“I went out with my mum and we just saw it in the distance and though, ‘Oh my god what is that,’ it looked like some kind of alien invasion,” Dee O’Connell, a local, told the Hackney Gazette.

“It did look really weird but when we went up there were a million people and lights, and a catering van,” she added.

The strange symbols also appeared on the same day–Oct. 21–at Times Square in New York City and at Guanabara Bay in Rio de Janeiro.

Further, international Football Hall of Famer Franz Beckenbauer–the only man to have won the World Cup as both a player and a manager–appears on a video related to the “#WinnerTakesEarth.”

“Do you think aliens exist? Do you think they play sports? Friends, I have some horrifying news. The answer to both of these questions is ‘yes,'” Beckenbauer says in the video.

“Yes, aliens, and they want to play football against us,” Beckenbauer said. “The problem is, if we lose, they will destroy the planet.”