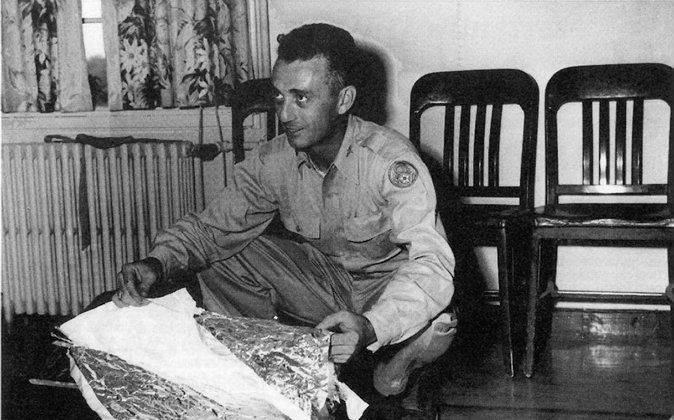 Major Jesse Marcel holds up pieces of a crashed weather balloon found 75 miles northwest of Roswell, N.M., in June 1947. Purported leaked documents, known as the Majestic 12 documents, claim that the weather balloon was a cover story for an extraterrestrial crash. If the documents are genuine, then a highly secret agency known as the Majestic 12 may have overseen the cleanup and cover-up of said crash. (United States Air Force/AFP/Getty Images)
Beyond Science

The Majestic 12 documents and subsequent belief in the existence of super-secret government agencies operating above the law and out of sight have fueled conspiracy theories for nearly three decades and have been depicted in pop-culture productions galore.

Before the “X-Files,” “Dark Skies,” and the “Men in Black” film series, came the Majestic 12 documents. The documents were anonymously sent to TV-producer Jaime Shandera’s residence in Hollywood, Calif., in December 1984 in the form of photos on 35mm film. Supposedly, after developing the images he spent the next few years researching and authenticating.

The documents brief about a secret government agency that was created in response to the crash at Roswell. The agency, known as Majestic 12, or MJ-12, would be responsible for handling the UFO/extraterrestrial situation in the United States, including but not limited to the cleanup of crashed saucers, dispensation of alien technology to be backwards engineered, and cover-up of alien visitation evidence.

The documents, which can be viewed on the FBI’s website at: http://vault.fbi.gov/ (search Majestic 12), outline the FBI’s investigation into this eight-page briefing on MJ-12 and the follow-up FBI investigation, which concluded that these documents were forgeries. Unfortunately, the FBI’s copies of the documents all have handwritten “bogus” on each page, making them a bit hard to read in their entirety.

Dated Nov. 18, 1952, they mention the Roswell incident, which happened in 1947. According to these documents, an alien spaceship did indeed crash at Roswell. Its propulsion system was apparently destroyed in the crash, but four alien bodies were recovered from the scene. It was concluded that the ship probably originated from outside our solar system and was probably a short-range craft. The document briefly describes another crash at El Indio, Texas, in 1950.

The MJ-12 documents were said to be briefing papers for President Elect Eisenhower from briefing officer Admiral Roscoe H. Hillenkoetter, first director of the CIA from 1947-1950. The documents also list the other members of MJ-12, all high-profile figures in the U.S. federal government.

The authenticity of the documents has been a hot debate since their public release in 1987 by Shandera together with partner William Moore, author of “The Roswell Incident.” Some supporters, such as retired Aeorspace Engineer Robert M. Wood, Ph.D., have spoken publicly in support of these documents, citing forensic evidence. Both the FBI and the Air Force claim that these documents are fakes, citing an Air Force investigation.

To make matters more complicated, others, such as alleged ex-special agent for the U.S. Air Force Office of Special Investigations (AFOSI) Richard Doty, claim that the MJ-12 documents are part of a large disinformation campaign that lasted decades and were orchestrated by the AFOSI to make UFO-researchers believe they were seeing alien technology when in fact the objects studied and observed were secret U.S. projects, according to the Huffington Post.

The jury is still out on the truth surrounding these documents, and other supporting documents have supposedly been leaked since these. But, whether these documents are true or false, they have certainly infiltrated pop-culture and perhaps even our collective unconscious.