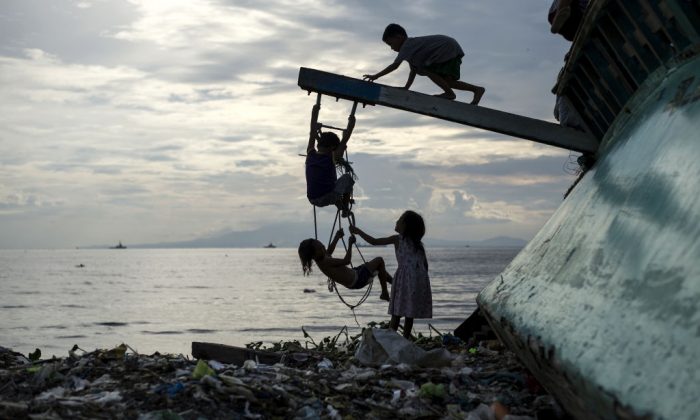 A massive creature was found dead near the Philippine coastline.

Authorities said the beast was too decomposed to identify, and they had to push it back out into sea because the smell presented a health hazard. Images from the scene show an animal that somewhat resembles a giant lizard, almost like a dinosaur. Some wonder if it could be a kind of whale, The Sun reported.

The 32-foot mysterious creature was seen in Maasin City, of Leyte Island in the Philippines. Local authorities said they couldn’t bury the creature because of its size and that its smell was a health hazard. A boat was used to tow the unknown creature out to sea.

Nujnuj Capistrano was passing by the beach when he spotted the animal. He posted his photos on social media.

“I was just passing by the beach and took some photos but I don’t know about the details. I was surprised because it’s too big and it’s the first time I saw that kind of creature,” said Capistrano, via News.com.au. “I don’t know what they did with it but one thing is for sure, the creature was already dead when I saw it. The smell was too bad. I can’t describe it, but it was a bad smell.”

This isn’t the first mysterious beast to wash ashore in the Philippines. In February, a peculiar-looking, white, hairy mass, seemingly an animal, was found on the shore of the Dinagat Islands. It was a baffling sight. It was 20 feet long and weighed over two tons. The remains were also too broken down to tell what exactly it was.

According to National Geographic, the majority of sea animals that die do not wash ashore. The article attributes the dead animal sightings to an earthquake that hit the country on Feb. 10, causing storm surges. A majority of these carcasses are baffling to those that see them and scientists can only guess at what creature they belonged to.

A recognizable but still unusual creature was spotted, also in Leyte, last April. A 14.4-foot oarfish was seen weak but still alive. More and more oarfish sightings have occurred in Leyte, ABS-CBN News reported. The finds are surprising since the creature usually resides in deeper waters. They are also believed by locals to be a sign of impending earthquakes.