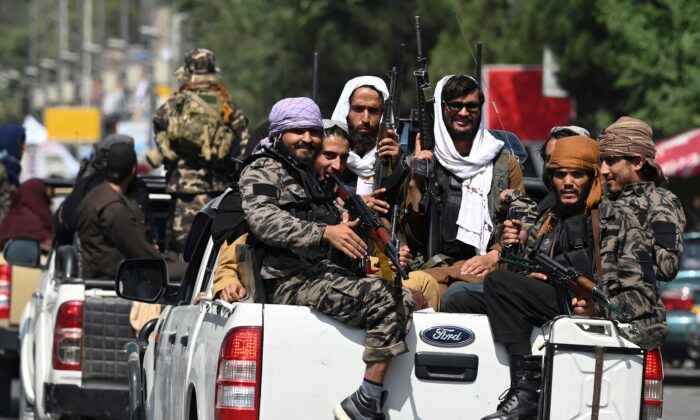 A convoy of Taliban fighters patrol along a street in Kabul on Sept. 2, 2021. (Aamir Qureshi/AFP via Getty Images)
Afghanistan

In an audio recording, Tarana music blares in the background while a man speaking Pashto asks his superior for permission to “hunt down everyone” on lists of Afghans who helped the United States. The unnamed speaker—who sources believe is a Taliban combatant—asks whether those captured should be killed, suggesting methods of execution.

The recording, obtained exclusively by The Epoch Times, was sent on Aug. 31 to the family of a former Afghan interpreter for the Department of Defense (now a U.S. citizen), who were left behind in the country.

The message of the recording is that the Taliban are now in control: “Thank God now the Americans have withdrawn from the airport and everything is in our own hands.”

The source of the recording, and why it was sent to this family, isn’t clear, although Department of Defense intelligence experts told The Epoch Times they believe it was sent to phone numbers taken by the Taliban from lists of those holding special immigrant visas (SIV)—the visas granted to Afghans who worked for the United States. The experts believe the recording is a psychological warfare operation meant to panic, and thus flush out, individuals who assisted the United States.

On Aug. 20, The Epoch Times reported that the Taliban had acquired U.S. surveillance equipment that might provide access to databases of biometric information on Afghans.

Politico reported on Aug. 26 that “U.S. officials in Kabul gave the Taliban a list of names of American citizens, green card holders, and Afghan allies to grant entry into the militant-controlled outer perimeter of the city’s airport.”

On Aug. 30, White House press secretary Jen Psaki pushed back against this report, saying that it was inaccurate to say such lists had been given “preemptively” to the Taliban.

In any case, the recording claims, “we received all of their lists, those who were relying on foreign forces to evacuate them to America.”

The speaker asks permission from his superior to “start searching from Kandahar and Badakhshan provinces” for Afghan allies stranded in the country. He asks, “What is your order regarding finding and gathering all of them and kill them, hang them, or expose them to the public or stone them to death—what should we do?”

Gen. Kenneth “Frank” McKenzie, head of U.S. Central Command, stated on Aug. 30 after the final evacuation flights had left Kabul that “less than 250 Americans” remained on the ground in Afghanistan. However, veteran groups at the center of evacuation efforts believe there are many more stranded Americans, not counting Afghans with Special Immigrant Visas and groups designated “vulnerable persons,” including Afghan Christians.

In a speech on Sept. 1, President Joe Biden defended the withdrawal as “an extraordinary success,” stating that the withdrawal deadline didn’t mean an end to evacuation efforts for Americans left behind. “We remain committed to get them out, if they want to come out.” No plan has been announced for how those left behind will be brought out.

The recording ends: “So when should we start the searches—today or tomorrow? Just give us the order, we have all of their lists.”

Translation of recording sent to family of Afghan American Former Interpreter for the US Military:

“Greeting Mawlawee Sahib, how are you doing? Thank God now the Americans have withdrawn from the airport and everything is in our own hands. Mufti Sahib, what is your order regarding those who had worked with the foreign forces, and should we start searching from Kandahar and Badakhshan provinces and also search for those who specifically worked with Americans as a spy and done a lot of things?

“Just let me know what is your order regarding finding and gathering all of them and kill them, hang them, or expose them to the public or stone them to death—what should we do?

“Now everything is in our hands and they can’t escape from us, should we be gathering them?

“We have their list—those who had worked with foreign forces, and all their lists were written in Qasaba [a district in Kabul] and in the airport and we received all of their lists, those who were relying on foreign forces to evacuate them to America. We received every single list of theirs, so what is your order should we gather them all and hang them? So when should we start the searches—today or tomorrow? Just give us the order, we have all of their lists.”