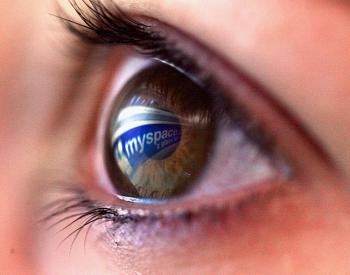 MySpace Layoffs: MySpace is laying off almost 50 percent of its workforce. In this photo illustration the MySpace logo is reflected in the eye of a girl. (Chris Jackson/Getty Images)
Business & Economy

The price for MySpace is reportedly $35 million in cash and stock, a far cry from the $580 million Rupert Murdoch’s News Corp. spent six years ago to purchase the social networking giant.

The popularity of MySpace predated the success of Twitter and Facebook, and up to three years ago it was still considered the world’s biggest social networking site. With a decline in users visiting the site over the years, combined with the short duration of users as well as a drop in demand from advertisers, MySpace’s profit margins also dramatically narrowed. For instance in the United States, MySpace lost more than 50 percent of its regular website visitors since its peak in December 2008. According to marketing research firm ComScore, there were only 34.9 million users in May on MySpace whereas Facebook had 157.2 million.

Today, MySpace’s forte is being a website for promoting and sharing music and marketing new musicians.

"MySpace is a recognised leader that has pioneered the social-media space," Specific Media’s founder and chief executive Tim Vanderhook said in a statement. "The company has transformed the ways in which audiences discover, consume and engage with content online. There are many synergies between our companies as we are both focused on enhancing digital-media experiences by fuelling connections with relevance and interest."

Specific Media is an online global mutli-media company which operates as platform for advertisers to connect with consumers with different methodology. Founded in 1999 by brothers Tim, Chris, and Russell Vanderhook, Specific Media is currently headquartered in Irvine, Calif.

Justin Timberlake, a Grammy-winning recording artist and actor, will join forces with Specific Media to “rebuild and reinvigorate” the ailing social network company. Timberlake will have an ownership stake and involvement in developing the company.

“There’s a need for a place where fans can go to interact with their favourite entertainers,” Timberlake said in a statement. “I’m excited to help revitalise Myspace by using its scoal media platform to bring artists and fans together.”

Despite job cuts earlier in the year, with up to 47 percent of MySpace positions eliminated, there are now more jobs at stake following the merger. According to a News Corp.-owned Silicon Valley blog, the result of the buy out will lead to around 400-500 MySpace staff being laid off.