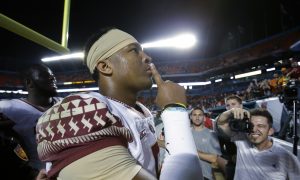 Myron May has been identified as the gunman who shot three people at Florida State University early Thursday before being shot dead by police.

A law enforcement official identified Myron, who graduated from the school.

After graduating, Myron graduated from Texas Tech University’s law school, according to his Facebook. He also at one point attended the Gulf Coast State College.

He was living in Wewahitchka, Florida where he worked as an in-house legal counsel at the Taunton Family Children’s Home.

“This is a home for children who have no other place to go due to various circumstances. Kids are taken in and raised as part of the Taunton Family. It is completely non-profit and the founders David and Abby do not accept any government support,” the home says in its description.

May was fatally shot early Thursday after he shot three people at the Florida State library. Two are hospitalized and one has been released.

Abigail Taunton, who runs the foster home, said that May had recently been staying at a guest house she owns. She said police interviewed her husband, David, after the shooting.

“He’s just a boy our kids grew up with that we let stay in one of our guest houses for a while,” she said. “He’s moving back home from Texas and we were trying to help him get on his feet. It’s horrifying.”

Records show May was licensed to practice law in Texas and New Mexico. Taunton said he was planning to take the Florida bar exam in February.

“We’re just all astounded. We had no idea that he would do something like this,” Taunton said. “Obviously, he was not in his right mind.”

She said she had known him since he was about 13 or 14 and that he ran cross country with her kids and stayed at her house a lot. She said he lived with his grandmother after coming out of a “bad situation” with his parents.

“He was a well-liked, real smart. He was having some financial issues and moved back home and decided he’d come back to Florida to work,” she said. “My heart’s broken. In a million years I wouldn’t have thought he’d do something like this. He was struggling, having decided that what he was doing out there was not good. He had some issues and just decided he’d come home. He was struggling, like we all do, financially and otherwise.”

May was fatally shot early Thursday after he shot three people at the Florida State library. Two are hospitalized and one has been released.

The shooting happened about 12:30 a.m., sending hundreds of students who had been up all night studying for exams scrambling for cover in the book aisles and barricading themselves in with desks. Three students were wounded before police killed the gunman in a shootout, authorities said.

May had posted multiple updates on his Facebook that indicated he might be troubled. One was a screenshot of a Google search for “Targeted individuals” and several Bible verses. Just hours before the shooting he posted a verse that read “Blessed are the poor in spirit: for theirs is the kingdom of heaven.”

“here is a joke in there about freshman year but I’m going to refrain from being profane. Pound sign: maturity,” a friend replied.

May also frequently wrote his own proverbs, including one that goes: “Beware the Good Idea Fairy: Her wings of passion and sincerity allow her to sore, but she is completely devoid of logic and common sense.”