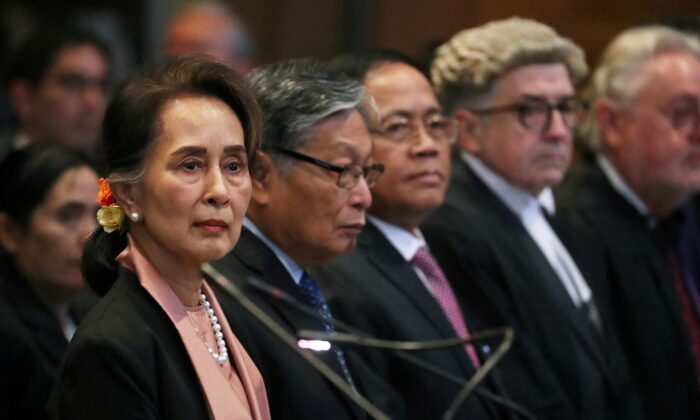 Burma's leader Aung San Suu Kyi attends a hearing in a case filed by Gambia against Burma alleging genocide against the minority Muslim Rohingya population, at the International Court of Justice (ICJ) in The Hague, Netherlands, on Dec. 10, 2019. (Yves Herman/Reuters)
International

The military junta in Burma (also known as Myanmar) has ordered all legal proceedings against deposed leader Aung San Suu Kyi to be moved from a courtroom to a prison, a source familiar with her cases says.

Suu Kyi, a Nobel Peace Prize laureate who turned 77 on Sunday, has been charged with at least 20 criminal offences since she was toppled in a coup early last year, including multiple counts of corruption.

She has denied all charges.

Some media reported Suu Kyi had also been moved from house arrest into detention in Naypyidaw prison on Wednesday.

Reuters could not independently verify these reports.

Junta leader Min Aung Hlaing has so far allowed Suu Kyi to remain in detention at an undisclosed location in the capital Naypyitaw despite convictions for incitement and several minor offences.

The secret location where she had been held for about the past year was a residence where she had nine people to help with her living arrangements, along with a dog that was a gift arranged by one of her sons.

The source, who declined to be identified due to sensitivities over the trial, said hearings would be shifted to a new special court in Naypyitaw’s prison.

“It is declared by the judge that a new building for the court is complete,” the source added.

The ruling military council could not immediately be reached for comment.

Australian economist Sean Turnell, who was an adviser to Suu Kyi, is being held at the same prison where Suu Kyi was sent.

Turnell and Suu Kyi are being prosecuted in the same case under the Official Secrets Act, which carries a maximum prison sentence of 14 years, so both are to appear at the court inside the prison on Thursday.

In addition to the 11 counts of corruption, Suu Kyi and several colleagues have been charged with election fraud, which carries a maximum sentence of three years.

A gag order has been imposed on her lawyers, whose only access to her is on trial days.

It is not clear how much Suu Kyi knows of the crisis in her country, which has been in chaos since the coup, with the military struggling to consolidate power and facing increasing resistance from militia groups.

with reporting from AP