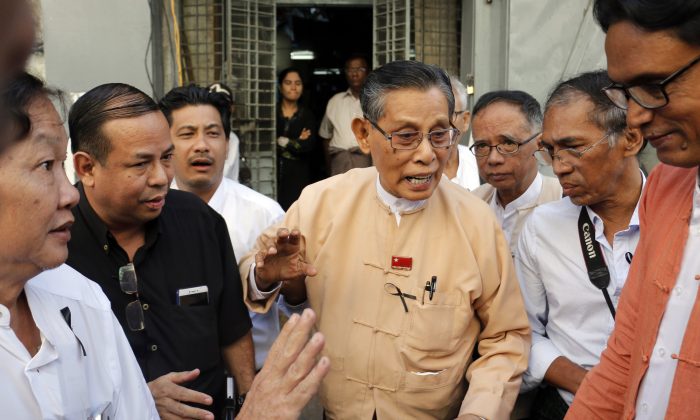 Tin Oo, center, senior leader of Myanmar's ruling National League for Democracy, talks to journalists as he leaves Ko Ni's house in Yangon, Myanmar Monday, Jan.30, 2017. A gunman killed Ko Ni on Sunday, shooting the lawyer in the head at close range as he walked out of the Yangon airport, the government said. (AP Photo/Thein Zaw)
International

YANGON, Burma—Burma politicians, activists and others shocked by the assassination of a longtime adviser to leader Aung San Suu Kyi gathered Monday at a cemetery for his funeral, while police investigated the motive for the killing.

Ko Ni, a prominent member of Burma’s Muslim minority, was shot in the head at close range as he walked out of the Yangon airport Sunday.

The killing shocked many in Yangon because attacks on prominent people are rare, although security forces are notorious for brutal behavior in remote rural areas, especially when dealing with ethnic minorities.

Ko Ni “is irreplaceable for both Aung San Suu Kyi and the party,” Suu Kyi’s ruling National League for Democracy party said in a statement. He was especially valued as an expert in constitutional law, looking for ways to sidestep provisions placed in the charter by an earlier military junta to retain power at the expense of elected governments.

Journalists and human rights workers who have found Suu Kyi’s government almost as difficult to deal with as the military-backed regime it replaced found him a familiar and helpful figure.

At the same time, he was active in defending the rights of Muslims, who often face discrimination in Buddhist-majority Burma. Last year, he helped found the Burma Muslim Lawyers Association, which was criticized by ultra-nationalist Buddhists monks as well as by some of his political allies, who feared it encouraged sectarianism.

The alleged gunman, identified by police as Kyi Linn, was arrested Sunday after he shot a taxi driver who tried to stop him from fleeing the airport, the Information Ministry said in a video posted on state-run MRTV. The driver died on the way to a hospital.

Police seized two guns from the suspect. Authorities were searching for any possible accomplices. Speculation about the motive for the killing included political intimidation, anti-Muslim prejudice and a possible business dispute involving the victim’s private law practice.

Members of parliament, political activists and NLD party members gathered Monday for the funeral at a Muslim cemetery, said Tun Kyi, a prominent Muslim activist and a friend of Ko Ni.