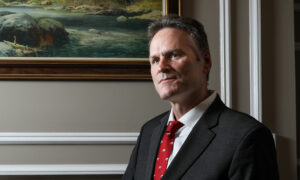 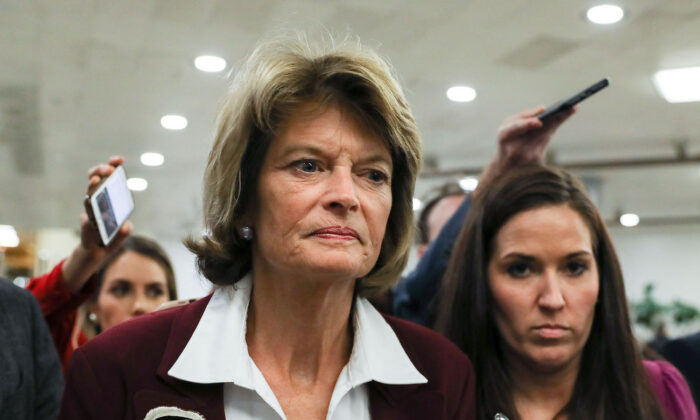 Sen. Lisa Murkowski (R-Alaska) walks through the Senate subway area during a break in impeachment proceedings, in the Capitol in Washington on Jan. 28, 2020. (Charlotte Cuthbertson/The Epoch Times)
Congress

Sen. Lisa Murkowski (R-Alaska) told reporters Wednesday that her state “needs relief” when asked what was needed for her to support of Biden’s $1.9 trillion “American Rescue Plan” that is headed to a vote in the Senate.

“So, my whole point for COVID relief, whether it was the five packages that we moved through in 2020, or this one, is to make sure that it’s targeted, targeted to the need. And whether it is relief for your small businesses, your tourism sector that’s been just brought to its knees, these are the types of things that I’m looking at saying, so show me in this huge $1.9 trillion proposal, how this helps a state like Alaska,” Murkowski told reporters.

The House of Representatives on Feb. 27 passed Biden’s $1.9 trillion stimulus bill, with no Republican support and two Democrats voting against it. The package now moves to the Senate where Democrats and Republicans will debate and vote on the legislation. Most Republicans have said the package is too costly and untargeted, and while Murkowski agrees, she wants a chance to negotiate for her state.

“What I’m saying is that I am looking to this relief package, my state needs relief. If Congress is going to move this much money out the door, how am I going to make sure that states like Alaska, who have been significantly impacted, who are still in need of rescue, if that’s the term that they’re using for this package, that we, in fact, get access to those rescue dollars,” continued Murkowski.

The Alaska Senator told reporters that if the Biden administration wants her votes for nominees and their “American Rescue Plan,” then they will have to help her state recover from all of the executive actions that have ended Alaskan jobs. Murkowski said the Biden administration has had seven executive orders that have had a direct and destructive effect on Alaska’s economic development projects.

“I am going to use every opportunity that I have, and if that means getting the administration’s attention, because they want to make sure that they’ve got my vote on this nominee, or that nominee, I’m going to take the time to sit with them and tell them or talk with them on the telephone and tell them about my state,” Murkowski added.

Murkowski said while other states are showing movement toward economic recovery and economic growth, Alaska is not and will need a lot of help.

“I can tell you that if you look at Alaska’s economy, and when the nation has been doing well, my state has been in recession. We are not in sync with the lower 48, with our economy, and so, nobody gets it, nobody understands it. So, I’ve got to be that pushy advocate.”

In January, Murkowski expressed her disappointment with the Biden’s order to stop oil and gas leasing on federal lands, saying, “I support a transition to clean, sustainable energy, but pulling the rug out from under Alaska’s economy is not the way to go about it. Alaskans are already struggling to overcome the impacts of the COVID-19 pandemic. Inhibiting Alaska’s resource development will only hamper our ability to recover.”

Melanie Sun contributed to this article.