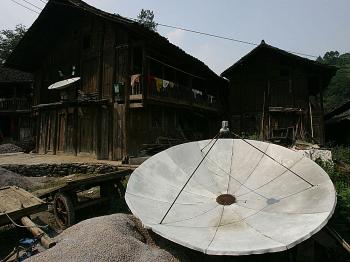 By Ren Zhichu
Print
My mother is more than 70 years old, she worked hard in a farming village in Shandong province most of her life. She had been in school but very few days in her childhood. Farming villagers’ lives were very difficult in the early years of the Chinese Communist Party’s (CCP) regime, so she had to quit school.

In the late 1980s, my family bought a television set, but my mother hardly ever watched it. When we asked her why, she said with a smile that, “I could only watch people’s coming and going, but could not understand the reason.”

When I was in college, my siblings were all married, so my mother was relatively more relaxed. She watched the television with my father. With the help of my father, she learned to understand some simple programs.

After my father passed away, I asked my mother to stay with me in the city. Other than doing the household chores for me, she watched the television occasionally. Since I rarely watch television, I cannot share with my mother any programs on television.

A Pot Cover Brings the News

Early in 2007, I spent more than a month of spare time to install a small satellite dish and was able to adjust it and find the New Tang Dynasty Television (NTDTV) myself. The moment we received the NTDTV program, my mother did not know what that was, but was amazed that a large “pot cover” was able to deliver the messages from a satellite in the sky, she grinned widely.

Since then, other than watching the local weather report, she never watches programs from Mainland television stations. Watching the NTDTV news update has become her biggest hobby. It is probably her biggest and most lasting hobby.

Through the NTDTV, my mother has learned a lot of things. She cautiously (worrying about being laughed by me) exchanges her views at the dining table or casual chatting subjects like; Merkel (Angela Merkel, Germany's first female chancellor) is nice to Chinese people and dares to speak up; president Bush’s approach regarding the communist regime’s evil conducts is unclear, he dares not to talk; Could Obama be a stronger president; the long faced Ma Ying-jeou (President of Republic of China, often known as Taiwan) looks like a good man; the small fellow Sarkozy is unstable, like this for a while and like that for a while; the United Nation’s General Secretary Ban Ki-moon has no guts to speak for Chinese people; Peng Keyu (Chinese Consul in New York) is not up to par, he maneuvered some Flushing strong men to beat up elderly people; ……

Although most of the NTDTV news reports did not happen directly around my mother, she is able to realize the truth of the news because of her personal encounters. She deeply feel Chinese people’s predicament when facing unfairness. In particular the news about the CCP’s persecution of Falun Gong, she did not even have the nerve to watch some of the scenes. Because she had witnessed so much of what had happened around her, she knows that all that was reported by NTDTV was true.

A few days after my mother said “Peng Keyu is not up to par,” my mother anxiously told me when I came back from a business trip that she could not receive NTDTV. At first, I thought something had gone wrong with the disk, so I spent most of the morning trying to adjust it, but in vain. The next day, I learned the news on the website about Eutelsat’s “technical breakdown.”

The first few days, I comforted my mother by saying it would be fixed soon.

But the news came a few days later from the recording provided by the Reporters Without Borders and the recording of the CCP’s ambassador to Italy where both indicated that the CCP was the culprit behind the termination of NTDTV’s broadcasts.

I thought that since the CCP’s ignominy was exposed, the voice of justice from the civilized world condemning Eutelsat’s operator should make the ECS unable to resist, so I comforted my mother with confidence that NTDTV would resume broadcasting very soon.

But in her anxious waiting, I learned on July 29 that the long-term contract to transmit NTDTV into China had been cancelled.

The situation is that the U.S. Broadcasting Board of Governors (BBG) signed a contract with European satellite operator Eutelsat to let Voice of America (VOA), Radio Free Asia (RFA), and New Tang Dynasty Television (NTDTV) broadcast to tens of millions of small satellite dishes across China on a long-term, protected basis.

But on July 31, the eve of the Beijing Olympics, BBG cancelled its contract with Eutelsat for its broadcast on satellite W5, which is the only satellite protected by the Open Satellite Window agreement. BBG will surrender the stations’ on/off switches to Chinese authorities. Instead of being assigned to the satellite W5, U.S. international broadcasting channels will be assigned to the China-controlled satellite AsiaSat 3S.

On July 10, Reporters Without Borders released a detailed investigation showing that Eutelsat’s shutdown of NTDTV’s signal was a premeditated, politically motivated decision to satisfy Beijing’s demands and get Chinese concessions and contracts. The Wall Street Journal also revealed in 2005 that Eutelsat repeatedly tried to shut down NTDTV’s Asia broadcast under pressure from Beijing, in return for Chinese state business.

For a moment, I did not know how to face my mother’s anxious look. I did not have the heart to disappoint my mother. No, actually it would be desperation for her. As I thought of my previous comforting excuse that the NTDTV would resume soon, I suddenly felt I deceived her.

When Will the Messenger Appear Again?

The NTDTV, a lovely little angel, used its skylark kind voices to tell us the truth about China and the truth of the world. It gave us unlimited strength to recognize deceit, clear our worries, overcome fear, and to deal with the cruelty of reality and predicaments of life with a smile. But this lovely angel was hurt by the CCP using the hands of Eutelsat, and now was again “abandoning the treatment” by the BBG that represents the United States government.”

NTDTV, the lovely little angel, must you forever part this hot land of China that has infinite expectations of you?

The BBG and all just and kind people in the world, do you know the feelings of a lonely and helpless Mainland mother and child at a time like this?