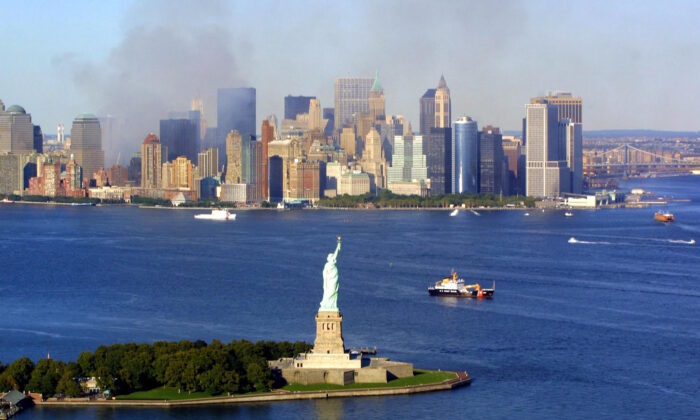 My Memories of the 9/11 Boat Evacuation

Christina Stanton
Christina Ray Stanton wrote an award-winning book, “Out of the Shadow of 9-11: An Inspiring Tale of Escape and Transformation.” She is a licensed New York City tour guide and a sought-after speaker on 9/11. She can be reached at ChristinaRayStanton.com
View profile
Follow
biggersmaller
Print

On the morning of Sept. 11, 2001, my husband and I were awakened by a huge explosion that shook our building. We ran to the terrace on the 24th floor of our apartment building just six blocks from the World Trade Center to see thick black smoke coming from the North Tower. Then a second plane came roaring overhead and struck the South Tower. The impact hurled us backward into our living room and knocked us unconscious. When we came to, we grabbed our dog and quickly evacuated our building. Barefoot and still wearing pajamas, we sought safety in nearby Battery Park. But the nightmare continued. The towers soon fell, covering us with toxic dust and debris, and heavy smoke surrounded us in a deadly cloud.

We were trapped. We desperately needed to get off the island.

A crowd gathered along the Hudson, and we managed to board a boat headed to New Jersey. It was a large, white NY Waterway boat, a ferry service for commuters.

The ferry soon filled with Lower Manhattan residents, office employees, hotel staff, students from nearby schools, tourists, and mothers holding babies. Some appeared unscathed as if they hadn’t been in the chaos at all, while others were yellow from dust, and a few red from blood. Many were crying or had a stunned, wide-eyed, panicked look on their faces.

As we left the burning city behind us, I took in the view of the harbor. Boats of all shapes and sizes were racing toward Manhattan from every direction.

Sept. 11 would prove to be the largest sea evacuation in recorded history, surpassing the Miracle at Dunkirk—the rescue of British and Allied forces from the French seaport during World War II.

Immediately after the New York attacks, subway trains were shut down, all bridges and tunnels were closed to Manhattan, and buses were suspended or rerouted. More than a million workers and residents south of Canal Street found themselves fleeing north on foot, through streets littered with dust and debris from the collapsed buildings, or heading south and west, hoping for a water rescue.

When it came to the attention of the U.S. Coast Guard that large crowds were pooling at the coastline, they issued a radio call to assist in the rescue. Dan Ronan, former director of vessel trafficking service of the U.S. Coast Guard Sector New York, said, “We made the conscious decision that we wanted the professional mariners of New York—of which there are many and who are very talented—to be that workforce to move people that day.”

“Seafarers have a long tradition of selfless service to others,” said Peter Johansen, former COO of NY Waterways, who was a key organizer of the boat evacuation. “When a vessel puts out a distress call, any vessel that can assist goes to their aid. The same thing happened on 9/11.”

The Coast Guard wasn’t sure how many boats would respond, but respond they did—an estimated 150 of them. New York Harbor quickly filled with sightseeing boats, ferries, tugboats, water taxis, dining boats, personal watercraft, fishing boats, and party boats. Some of them raced back and forth across the harbor all day, dropping off passengers in New Jersey, Brooklyn, Staten Island, and upper Manhattan.

Those evacuated were a true cross-section of New York City demographics. It’s estimated that 300,000 office workers from states such as New Jersey, Connecticut, and Pennsylvania, along with 25,000 residents, 50,000 students, and hundreds of tourists were downtown that Tuesday morning. The spontaneous boat evacuation of 9/11 rescued 500,000 people in less than nine hours, thanks to at least 800 maritime heroes.

It’s hard to believe it’s been 20 years since my husband and I landed in our pajamas, barefoot, and completely yellow with dust, on the shores of New Jersey. We were able to continue on with our lives, when almost 3,000 precious souls were not. But on a day of devastating loss, we also witnessed selfless acts of true, unsung American heroes.

“When the Coast Guard sent out the message ‘Calling All Boats,’ the mariners did as they have always done, rescue those in danger,” Johansen said. “I wouldn’t want to live in a world where that didn’t happen.”

Christina Stanton
Follow
Christina Ray Stanton wrote an award-winning book, “Out of the Shadow of 9-11: An Inspiring Tale of Escape and Transformation.” She is a licensed New York City tour guide and a sought-after speaker on 9/11. She can be reached at ChristinaRayStanton.com