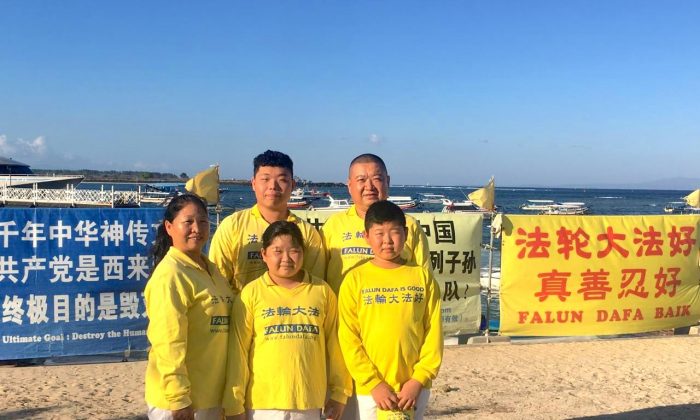 ‘My Kids Cannot Go to School:’ Mother of Three

“My twins were born in Hong Kong in 2007, and so have permanent residency. Who could imagine that for years they haven’t received normal schooling in a time of peace?” Ma Xiaoqin, a mother of three, asks the world this question in 2019. Her eldest son, 18, has not had any schooling since he was 12.

In 2006, 39-year-old Ma Xiaoqin, living in Shenzhen City, China, and who already had a 5-year-old son, found that she was pregnant. As China still had the “One Family, One Child” policy, she thought she would be forced to have an abortion.

However, her husband Liu Kai strongly objected to the idea, as abortion goes against the principles of his Falun Gong (also known as Falun Dafa) practice, which explicitly state that abortion equates to killing, and killing is strictly prohibited for practitioners of Falun Gong.

Luckily, Ma had a friend who was married to a Hong Kong resident. Her friend suggested that Ma go to Hong Kong for the birth, as Hong Kong didn’t have the one child policy and granted permanent residency to babies born there.

Ma happily followed her friend’s suggestion, and was overjoyed when she learned that she was pregnant with two babies—a boy and a girl.

Thanks to Hong Kong’s generosity and “open arms,” Ma didn’t have to abort her unborn babies unlike many other Chinese women who had no choice.

When her twins, Mingxin and Mingyuan, were 3-years-old, Ma sent them to a kindergarten in Hong Kong, where she believed they would receive a better education.

At that time, Ma and her husband were running a successful catering business in Shenzhen. Every day their twins boarded a school bus and traveled between Shenzhen and Hong Kong for their classes. Their eldest son, Ronghe, attended school in Shenzhen.

Life went on relatively smoothly until one day in 2011 when everything was suddenly turned upside down. On June 25, when Liu Kai was about to send Ronghe to school, several police officers suddenly arrived at their home and took Liu Kai away. Liu Kai’s brother, also a Falun Gong practitioner, was arrested at the same time, his home was raided, and all of his Falun Gong-related materials were confiscated.

The Covert, Yet Real Persecution of Falun Gong

Seeing his father taken away by police, Ronghe was terrified. Ma was equally shocked and terrified. Although she knew that Liu practiced Falun Gong, and she had also learned it from him when she was pregnant with the twins to ease her severe pregnancy complications, she had no direct experience with or idea about the persecution of Falun Gong.

Falun Gong is a Buddhist-school practice for self-improvement, consisting of meditation, gentle exercises, and moral teachings centered on the principles of Truthfulness, Compassion, and Forbearance. It is free of charge and gained widespread popularity in China during the 1990s due to its alleged health benefits.

Because of its immense popularity, the Chinese Communist Party (CCP) launched an intense persecution of Falun Gong in July 1999, when the practice had between 70 to 100 million followers. Then, mass arrests, imprisonment, brainwashing, torture, and deaths of Falun Gong practitioners began happening.

However, due to the information blockade in China, Ma literally knew very little about the persecution; and Liu Kai hadn’t told her much so she wouldn’t be afraid.

Liu was released after one day’s detention, but his brother was eventually sentenced to three years in prison.

After that, the police constantly harassed Liu’s family, threatened Liu’s parents, and even attempted to take Ronghe from his school.

The police officers copied all of the contacts in Liu’s cell phone when he was detained. They also called his customers to threaten them, and told them not to do business with Liu.

The police started following Ma. Once, when she accompanied her twins to Hong Kong to attend a school performance, a police officer followed her and tagged along for the entire day, following her to the twins’ kindergarten, to her friend’s home while she visited, and on the return train.

“The police officer didn’t bother to hide the fact that he was following us. Police actually threatened that they could take my children any time they liked. Once they blocked the one-way road of the school bus my kids were riding on and held it there for about 30 minutes,” Ma said, “They also threatened that they could have us disappeared in 10 minutes if they wanted.”

“The CCP ‘s policy toward Falun Gong practitioners is to ‘ruin their reputations, bankrupt them financially, and destroy them physically’. Under this kind of circumstance, it was very hard to continue living in China.”

On July 25, 2012, Liu Kai escaped to Indonesia. He chose Indonesia because he didn’t need a visa to enter, and he had a friend there who could help him after he arrived.

Two months later, Ma and the three children followed. “I didn’t initially intend to leave like that. I had found a primary school in Hong Kong for my twins and planned to have them attend. However, after my husband left, the police kept threatening and monitoring us. Every day we lived in fear. I also worried that they would take my children away. I had to leave with only a small amount of cash and abandon all the wealth we accumulated through our hard work.”

The Hardships of Being Refugees

After Ma left, their company in China was closed. Two of their properties were involuntarily sold at auction and the proceeds were frozen by the court. Ma and Liu didn’t receive a penny.

Ma and her family were granted refugee status in 2013 by the office of the United Nations High Commissioner for Refugees (UNHCR), and waited to be referred to a country that would accept them. However, that never happened.

“Refugees are not allowed to work in Indonesia. We have always been struggling very hard to make ends meet. As a result, we cannot afford to send our children to private school, nor would the public school accept them.”

Because Ma and her husband cannot work, they don’t have money to rent a house. They live at a space provided by a local Falun Gong practitioner. The twins live with their parents in a single room, and Ronghe sleeps alone in a small pavilion on top of the house, which has no walls.

When it rains, the bamboo curtains around the pavilion doesn’t prevent the water from pouring in from all directions. On sunny days, the area is extremely hot.

“Indonesia is very close to the equator, so it can be very, very hot here. To tell you the truth, I can hardly bear to see him sleeping in such a place. It really breaks my heart,” Ma said.

Ronghe was 12 and a 4th grade student when he left China. Since then, he has not had any schooling. He has been feeling very lonely, often shuts himself off from others, and cries secretly.

He managed to remain on an internet chat platform with his former classmates, and that is his only connection with the outside world.

Mingxin and Mingyuan are 12 now. They were a little bit luckier, as they were allowed to attend a local school in Bali, where they have been living since 2014.

However, in 2017, the school principal suddenly notified Ma that she would have to pay 1,000 yuan ($141.61) per month for the children to continue attending. As Ma couldn’t afford this, her twins stopped going to school.

Further more, local school are usually for local kids, and not open to refugees.

The twins try to be brave by keeping each other company and studying at home.

Hard to Get Help

Trish Cameron, a lawyer appointed by UNHCR to represent Liu Kai when he was detained in 2017, told The Epoch Times in an email, “As a lawyer I am unable to comment personally, or breach privacy. If the family is having difficulties they can request a counseling meeting with UNHCR to discuss any matters of concern with them.”

The reply stated: “To come to Canada as a refugee, they must:

The Indonesia Falun Dafa Association then tried to contact UNHCR to ask about a referral for Ma’s family and several other Falun Gong practitioners, and attached the reply from the Prime Minister’s Office to their letter. However, UNHCR did not respond.

Is the CCP ‘Long Arm’ Playing a Role?

Ma said: “As far as I know, more than 200 Falun Gong practitioners have obtained UNHCR refugee status in different Asian countries. But we all live in distress. Looking forward, we have nowhere to go; looking back, we have no place to return to.”

Bitter Winter recently released a 19-minute documentary “The Long Arm of the Dragon: Chinese Harassment of Refugees Fleeing Religious Persecution,” detailing “how religious persecution in China generates refugees, and how the CCP extends its ‘long arm’ abroad to prevent religion-based refugees from obtaining asylum and persecuting them with various forms of harassment and violence.”

In one instance, the CCP pressured the Russian government to deport UN refugees Ma Hui and her daughter back to China. Their fate is unknown.

In another instance, according to the documentary, a refugee, surnamed Zhang, who was seeking asylum in Thailand, died strangely in hospital after a minor car accident. People suspected that he was poisoned [by the CCP] while hospitalized.

Ma said that in September 2016, Chinese premier Li Keqiang pledged $100 million dollars in humanitarian aid to the United Nations, and a $1 billion fund China had set up with the United Nations could also be used to address the displacement crisis. “I don’t know whether it is a coincidence or not, but since 2016, none of the Falun Gong refugees in Indonesia has been referred to another country for settlement, while UN refugees in other countries have been sent on. We all know that the CCP hates Falun Gong the most.”