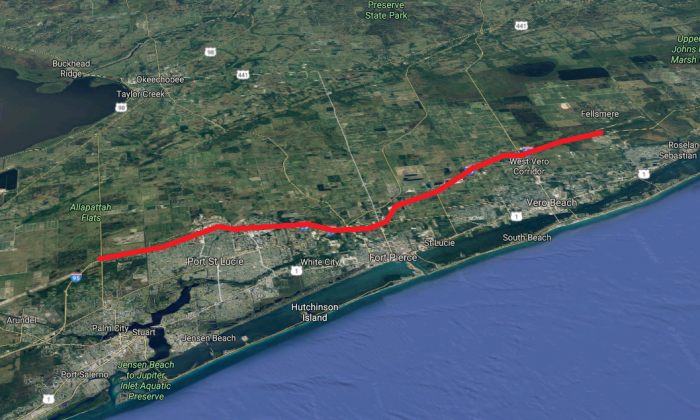 The approximate route Joseph Cooper involuntarily sped in his BMW down I-95 in Florida on Feb. 12, 2018. (Screenshot via Google Maps)
Crime and Incidents

“You have no idea why it could be stuck?” The dispatcher asked. “No ma’am, I do not,” Cooper said, according to a recording of the call published by Vero News.

“Are you able to get your vehicle in neutral?” The dispatcher asked.

“Ma’am, I’m in a BMW and if I slam that over, it’s going to drop down a gear and I really don’t want that to happen,” he said. “It could spin me out.”

The operator suggested an emergency brake.

It wasn’t the rush hour, but there was still traffic.

“Get out of the way!” the operator could hear Cooper yelling.

Cooper sped out of Martin County and through St. Lucie County. As he reached Indian River County, law enforcement deployed stop sticks to blow his tires. He avoided them, ABC News reported.

The second attempt blew two tires on the right side, which slowed the car to about 60 mph, the Florida Highway Patrol stated.

More stop sticks blew the remaining two tires on the left side. The car slowed down to 40 mph.

“The vehicle was traveling on all 4 rims with no tire,” the highway patrol said.

The car was towed away, while Cooper was taken to the Indian River Medical Center with chest pain.

“Thank God in this situation nobody got hurt,”  Lt. Alvaro Feola of the highway patrol said.

BMW North America spokesman Thomas Plucinsky stated in an email, “the scenario described is implausible to BMW,” based on the media reports they’ve seen.

The car uses an electronic gas pedal constructed to prevent it from being jammed by the floor mat or an object, he said. It also “uses software logic to override the accelerator whenever the brake pedal is pressed while driving,” Plucinsky said. “This fail-safe software means that if the vehicle detects that both pedals are depressed, the on-board electronics will reduce engine power so that the driver may stop safely.”

He also suggested switching the transmission to neutral or shutting off the ignition without removing the key would have allowed the driver to coast the car to a stop.

The company “would be happy to work with the Florida State Police to investigate the cause of this incident,” he said.