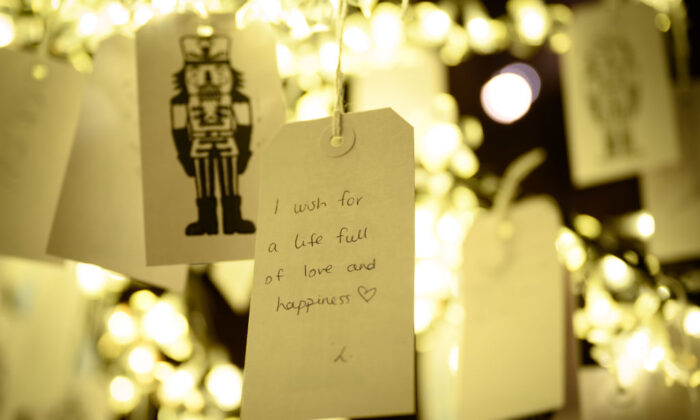 Handwritten Christmas wishes hang from a Christmas tree as a part of in Woodstock, England, on Nov. 18, 2021. (Leon Neal/Getty Images)
Viewpoints

Attending Christmas Midnight Mass back in the 1990s, I heard an inspiring sermon by the celebrant that night. When concluding, the priest wished us in the congregation a Merry Christmas with the words: “I wish you the Peace of the angels that sang and touched the earth that first Christmas night.” Those words have remained with me for over 25 years.

Peace is associated with Jesus Christ in many places in scripture. Indeed, the Prophet Isaiah (9:6) foretold that: “For a child will be born to us, a son will be given to us; … and His name will be called Wonderful Counsellor, Mighty God, Eternal Father, Prince of Peace.”

As St. Luke tells us in his Gospel (2:14), the angles on that Christmas night announced Christ’s birth by singing: “Glory to God in Highest Heaven, and on Earth peace to men of good will.”

At the Last Supper, before His passion and death, Jesus said to His disciples (John 14:27): “Peace I leave you, my peace I give you, peace the world cannot give.”

These are just some examples. I could refer to so many others. Which begs the question: what is this Peace?

Given what we believe as Christians, we must bear the insults, ridicule, hatred that will come our way. It is easy to be overcome with anger, resentment; bear a grudge, and engage in quarrels. However, without peace with each other, we cannot have peace in ourselves. In the “Peace Prayer” attributed to St. Francis of Assisi, we see the words: “Lord, let me be an instrument of your peace … where there is discord, let me bring union.”

Interestingly, this prayer first appeared on a holy card of St. Francis in 1915, at the height of World War I. However, this prayer, and its sentiments, are easily identified with St. Francis because they so thoroughly reflect his spirit.

In fact, it was St. Francis himself who gave the world the “Nativity Scene” (as we call it in Italian, il Presepio), to remind us of the humble circumstances in which Jesus was born. It is also said that St. Francis was inspired to recreate the original nativity scene to overcome the rampant greed and materialism prevalent at that time in Italy—much like the world today.

St. Francis understood that we are born to have gentle feelings for each other. We must not become cold, vicious, or savage. If we do so, we are no longer human beings. He knew that strife and disagreements break up everything, we must try to bring union and end rancour where we can.

We seem to have ignored the exhortation of the great Doctor of the Church, St. Gregory of Nyssa: “But what kind of existence do we have if we suspect one another?” This is not peace.

The world and its rulers have sought to divide us in the name of “the greater good.” Like those in St. Francis’ day, we have come to value riches, health, security for ourselves above all else. Riven with fear, we have done what former President Ronald Reagan warned against way back in 1964. We have sacrificed freedom for security. As he said in that famous speech, “A time for choosing”:

Our natural unalienable rights are now presumed to be a dispensation of government, divisible by a vote of the majority. The greatest good for the greatest number is a high-sounding phrase but contrary to the very basis of our nation, unless it is accompanied by recognition that we have certain rights which cannot be infringed upon, even if the individual stands outvoted by all of his fellow citizens. Without this recognition, majority rule is nothing more than mob rule.

The infringement on our liberty over the past two years is reminiscent of the banning of Christmas by the Puritans in seventeenth century England. In the early 1640s, as Oliver Cromwell consolidated his power, the Long Parliament promulgated legislation adopting the Directory of Public Worship, abolishing Christmas, Easter, and Pentecost and determining which form of worship was allowed. Specific penalties were to be imposed on anyone found holding or attending a special Christmas church service, it was ordered that shops and markets were to stay open, the Lord Mayor was repeatedly ordered to ensure that London stayed open for business.

However, this government intrusion was not welcomed by the people. Semi-clandestine religious services marking Christ’s nativity continued to be held on Dec. 25, and the secular elements of the day also continued to occur.

The attempts to prevent public celebrations and to force shops and businesses to stay open had led to violent confrontations between supporters and opponents of Christmas in many towns. Many writers continued to argue (usually anonymously) that it was proper to mark Christ’s birth on Dec. 25 and that the government had no right to interfere.

In the end, the attack on Christmas failed. The attack on the rule of law failed, leading to the Restoration, the Enlightenment that followed, and the ideals that inspired Constitutional government.

The intrusion of the government into people’s lives today has all the hallmarks of the same protectorate. Indeed, our governments have enjoyed the role of “Lord Protector.” But, as the rebellion in those days showed, there are times when dissent is necessary—to show that it is not proper peace when we tolerate lawlessness, or everything goes as wicked people wish, as they enrich themselves and increase their power.

This is not a peace that has a good goal. In such cases, we must go with fire and sword, rather than partake in evil. As another great Doctor of the Church, St. John Chrysostom, wrote, like-mindedness is not always good, for criminals agree among themselves.

This is my Christmas wish: that we learn to become peacemakers, and that we find once more a good peace. We cannot rely on anyone to do it for us. We must do it ourselves. As the angels sang: Peace on earth to people of goodwill!

Rocco Loiacono
Follow
Rocco Loiacono is a Senior Lecturer at Curtin University Law School in Perth, Australia, and is a translator from Italian to English. His work on translation, linguistics, and law have been widely published in peer-reviewed journals.