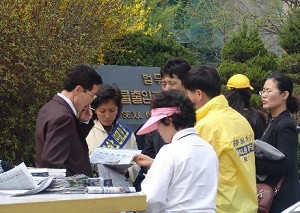 KOREA-On the morning of May 2, 2007, a Korean man from Jilin Province told the reporter that at the end of 2006, his brother-in-law suffered from a serious liver disease. He received a Falun Gong practitioner's liver, and his brother-in-law died seven days later.

A man in his 50s came to see the Falun Gong display in front of the Immigration Bureau in Seoul disclosing the Chinese Communist Regime's selling of illegally taken live organs. He said, “I know it's true. I didn't believe that live organ removal was real before, but now I totally do because it happened in my family.”

This man, who refused to disclose his name, said he went to China to his mother-in-law's funeral at the end of 2006. His brother-in-law suffered from a serious liver disease and needed a liver transplant. They went to a hospital in Beijing and paid over US$65,000.

We Knew About This Way Before You Did

After the Chinese Communist Party's (CCP) illegal harvesting of organs from live Falun Gong practitioners was exposed in March 2006, it received much international attention. Previously, few had heard of live organ harvesting because it happened secretly inside of concentration camps and forced labor camps. However, it wasn't totally unheard of.

Former Canadian Secretary of State David Kilgour (Asia-Pacific region) and human rights lawyer David Matas published their first report on July 6, 2006, that proved that live organ removal in China is true. On January 31, 2007, they published their second report to supplement the first one and almost doubled the documentation of evidence.

Their updated report mentioned the involvement of Chinese military hospitals and gave evidence implicating the General Hospital of the Armed Police Forces. The military hospitals make a profit from organ sales. Some patients who went to civilian hospitals for organ transplantation were treated by military surgeons.