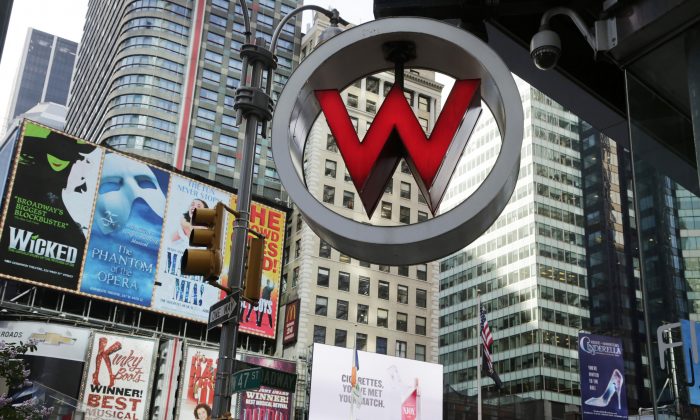 The logo for the W Hotel, owned by Starwood Hotels & Resorts Worldwide, is seen in New York's Times Square on July 31, 2013. Marriott International announced Monday, Nov. 16, 2015, it is buying rival hotel chain Starwood for $12.2 billion in a deal that will secure its position as the world's largest hotelier. (AP Photo/Mark Lennihan)
Business & Markets

Must Starwood Elites Give Up the High Life Under Marriott?

NEW YORK—Somewhere between their Westin Heavenly Beds and the room’s rainfall shower system, Starwood hotel loyalists were struck Monday morning by a new reality: their beloved loyalty program would soon be gobbled up by Marriott’s less-generous reward system.

“It ruined my breakfast. I realized all the effort put into lifetime status with Starwood has been wasted,” says Edward Pizzarello, a partner in a private venture capital firm who spends 130 nights a year on the road and writes the travel blog PizzaInMotion.com.

Marriott International announced plans Monday to buy Starwood Hotels and Resorts in $12.2 billion stock-and-cash deal. The transaction is expected to close in the middle of 2016. No details have been released yet on what it means for the loyalty programs but Marriott CEO Arne Sorenson says “we will take the best of both programs and make sure the bests are preserved.”

Starwood’s frequent guests are used to upgrades to oversized suites. They are guaranteed late checkouts. And forget calling a random 1-800 number. Those who spend 100 nights a year with the chain have personal “ambassadors” who are supposed to make “each trip special.”

Even road warriors loyal to other chains still have the Starwood Preferred Guest American Express card in their wallet. The transfer bonuses to airlines have long made it a favorite of miles junkies. For instance, it earns American Airlines or Delta Air Lines miles 25-percent faster than the airlines’ own branded credit cards.

Marriott does treat its top-tier platinum guests to nicer rooms but rarely gives them suites. Both programs offer free breakfast to platinum members, except Marriott doesn’t do so at its Courtyard hotels or at resorts. Late checkout isn’t guaranteed, just offered “subject to availability.”

“No Starwood Platinum member has ever said ‘I would rather be a Marriott Platinum,'” says Gary Leff, who writes about points and miles at ViewFromTheWing.com.

Starwood has 21 million members, Marriott 54 million. Many travelers are members of both programs. Top-tier with Starwood only requires 50 nights a year at its hotels; Marriott guests need to spend 75 nights.

Smaller hotel chains like Starwood and Hyatt have had to fight harder to win over business travelers and therefore offer more benefits to their most-frequent guests. Marriott, Hilton and Holiday Inn parent InterContinental haven’t needed to compete as hard since they have hotels everywhere and are able to attract business based simply on their size.

And for those without elite status, there is still plenty of interest in what happens to their points. Some type of conversion rate will have to be set since Starwood points are worth more than Marriott’s points, although Marriott stays earn points faster than Starwood ones. For instance, look at the cost difference between five nights at two luxury Florida hotels: The Ritz-Carlton, South Beach would be 280,000 Marriott Rewards points, while the St. Regis Bal Harbour would be 140,000 Starpoints.