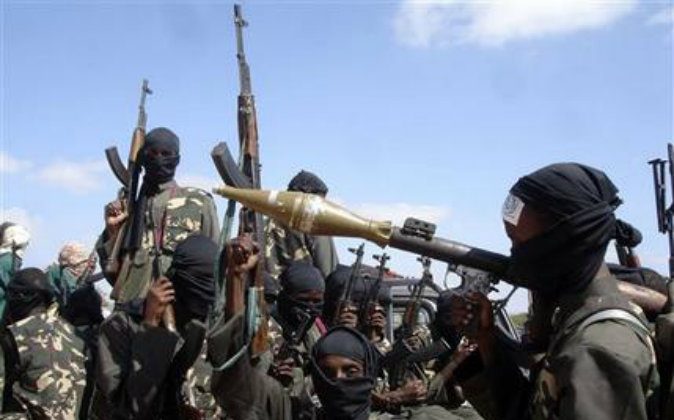 Armed al-shabab fighters on pickup trucks prepare to travel into the city, just outside Mogadishu, in Somalia, in this file photo. The terror group is increasingly crossing into Kenya. (AP Photo/Farah Abdi Warsameh, File)
Africa

Muslims Refuse to Be Separated From Christians During Terror Attack on Bus in Kenya: Reports

A group of Muslim passengers on a bus in Mandera, Kenya are being praised for refusing to be divided from Christian passengers.

Two people still died but it’s believed many more lives were spared because of the action.

The group told the militants “to kill them together or leave them alone”, a local governor told the Nation.

“They refused to separate from non Muslims and told the attackers to kill all passengers or leave. That is why some locals were injured trying to protect non Muslim passengers,” said Governor Ali Roba.

“They were trying to identify who were Christians and who were not. They told the non-Christians to return to vehicle,” added Deputy County Commissioner Julius Otieno of the attack.

Two people were left dead, one of whom tried to flee after the passengers were forced off of the bus, while three people were injured. The other person who died was reportedly a traffic police officer killed before or after the situation.

Meanwhile, an escape was accomplished because of a fortunate encounter.

“As the attackers started separating passengers according to their religions, we heard the sound of an oncoming lorry,” Abdirashid Adan, one of the injured, told the Nation.

The militants stopped the lorry and killed the conductor after he failed to recite an Islamic verse.

They then fled, and police are looking for them.

A BBC News correspondent, Bashkas Jugsodaay out of Nairobi, commented on the situation:

“The passengers on the bus showed great bravery, but there was another quality revealed by their surprising decision to stand up to the gunmen: Frustration. The majority of the local population in the north-east are Kenyan Muslims of Somali descent, and they have been hit hard by the consequences of al-Shabab attacks, even if non-Muslims are supposedly the main target of the Somali militant group,” he wrote.

“An attack last year in Mandera, in which Christians were killed after being separated from Muslims, caused the departure of more than 2,000 teachers, as well as many health workers who had come from other parts of the country. Perhaps the passengers felt that the region could simply not afford another such attack. It will be interesting to see if their actions embolden local populations to increase their resistance to al-Shabab, which has attacked the area several times.”