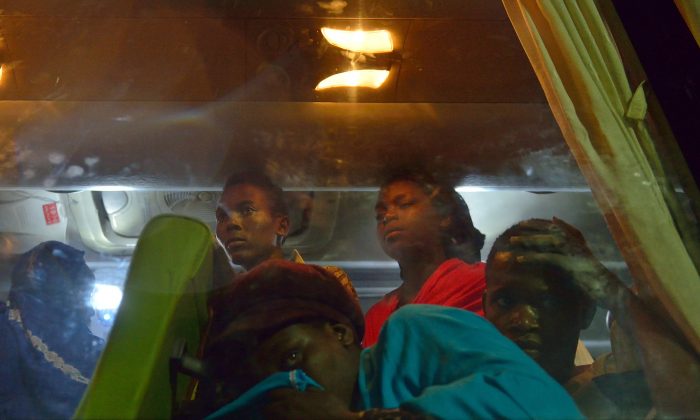 Survivors wait to disembark from a bus as they arrive at the Nyayo stadium in Nairobi on April 4, 2015, among survivors of an attack by islamist gunmen claimed by al-Shabab on a university campus in Garissa, northern Kenya. (Tony Karumba/AFP/Getty Images)
Africa

NAIROBI, Kenya—Muslims helped dress non-Muslims passengers in Islamic garb, to prevent extremists from identifying them for slaughter on a bus in northern Kenya, witnesses said.

The bus was from travelling from the capital city, Nairobi, with 60 passengers when it was stopped at Papa City by a group of Islamic extremists who shot the windscreen, witnesses said.

Some of the Muslim passengers gave non-Muslims head scarfs to try and conceal their identities when the bus stopped, probably remembering a previous attack in the same region last year when al-Shabab gunmen killed 28 non-Muslims from a bus, Abdrirahman Hussien, a 28-year-old teacher, said.

An extremist entered the bus and ordered everyone to get out and form two separate groups of non-Muslims and Muslims, said Hussein. One person, a non-Muslim decided to run and was shot in the back and died, he said. He said several non-Muslims managed to group with the Muslims.

Before the rebels began singling out and killing the non-Muslims, a Muslim passenger fooled the attackers by saying that a truck full of police officers that was escorting bus was not far behind, said a police official who insisted on anonymity because he is not authorized to give information to the media.

Kenya has experienced a wave of attacks by al-Shabab, which is linked to al-Qaida, since it sent troops to Somalia to fight the extremists in 2011.

Trump’s Idea of a Muslim Ban Has Legal Experts Divided

Mandera has carried the brunt of the attacks recently. Last week al-Shabab militants carried out three attacks on security forces in Mandera.