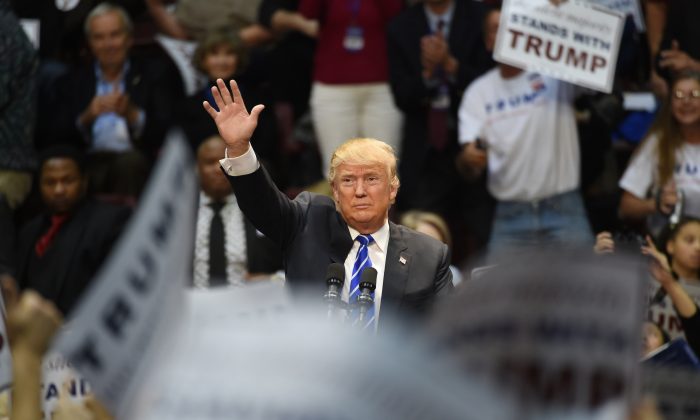 Muslim Woman Attends Trump Rally, but After She Stood up Security Moved In…

A Muslim woman wearing a hijab attended Donald Trump’s rally in South Carolina but she was soon removed by security.

Along with the religious head covering, Rose Hamid, 56, wore a shirt that read “Salam, I come in peace.”

She also wore a yellow star pinned to her shoulder that read “Muslim,” a reference to the gold stars that Jews had to wear in Germany under Nazi rule.

Trump’s proposed plan to ban Muslim immigrants and his willingness to label Muslim-Americans has been compared to the Nazis by some.

Hamid, a flight attendant, was sitting in the stands directly behind Trump in Rock Hill on Friday. She stood up when Trump suggested that some Syrian refugees fleeing Syria were affiliated with terror group ISIS.

Hamid didn’t speak but Trump supporters began chanting Trump’s name, which campaign staff had told people to do in case of protests, and pointed at Hamid and a companion.

Woman escorted from #Trump rally says she wanted to show his supporters what a Muslim looks like @jeffzeleny reports https://t.co/EFAxp0yMZO

Rose Hamid tells @DonLemon what #Trump supporters said to her as she was escorted out of tonight’s rally https://t.co/tScng1zsog

Security descended and escorted them out, with the crowd raining boos on them.

“The ugliness really came out fast and that’s really scary,” Hamid told CNN. Still, she noted that some of the crowd apologized as she was being led away.

She said before the event that she simply wanted to give Trump supporters a first-hand look of what Muslims are like.

“I figured that most Trump supporters probably never met a Muslim so I figured that I’d give them the opportunity to meet one,” she said, wearing a shirt that read “Salam, I come in peace.” “I really don’t plan to say anything. I don’t want to be disrespectful but if he says something that I feel needs answering I might — we’ll just see what strikes me.”

As the pair and two others were escorted out, Trump commented on what happened.

“There is hatred against us that is unbelievable,” Trump said. “It’s their hatred, it’s not our hatred.”