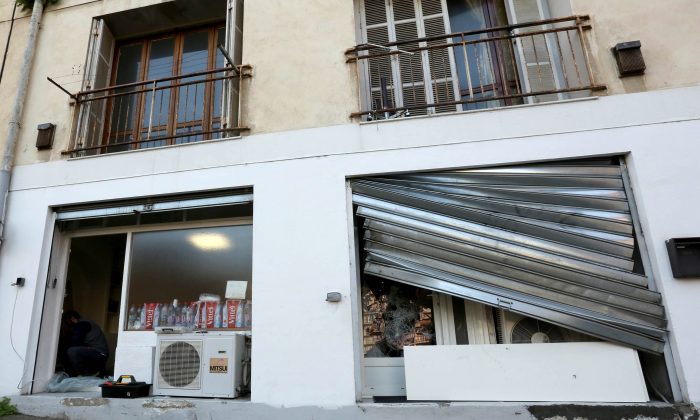 The damaged window of a Muslim prayer room in Ajaccio, on the French Mediterranean island of Corsica, Saturday, Dec. 26, 2015. (AP Photo/Jean-Pierre Belzit)
Europe

PARIS—A crowd vandalized a Muslim prayer room in Corsica a day after an ambush injured two firefighters responding to an emergency in a housing project, the state prefect on the French island said Saturday.

Prefect Christophe Mirmand said police reinforcements were being called into the Corsican capital of Ajaccio from mainland France, and prayer rooms and mosques were being guarded.

Two separate investigations were opened, one into the attack on firefighters Thursday and the other into the damage to the prayer room Friday, he said on iTele TV station.

Tensions were high on the Mediterranean island, widely known in France as the Isle of Beauty.

The violence began Thursday night, when firefighters responding to an emergency call were ambushed in a housing project in the hills of Ajaccio. It was not clear what prompted that violence.

On Friday, a gathering of about 600 people that started as a show of support for the injured emergency officials led to more violence when several dozen people broke away, headed to the prayer room. There, they threw objects and tried to burn Qurans and prayer books, officials said. They also vandalized a kebab shop.

“All these events are linked,” Mirmand said.

Video showed some in the group shouting “this is our home” before the prayer room was damaged.

France’s prime minister, Manuel Valls, called Friday for respect for French law after “the intolerable aggression toward firefighters and unacceptable profanation of a Muslim place of prayer.”

France’s interior minister, Bernard Cazeneuve, condemned those responsible for going after firefighters. He also said the “intolerable exactions” against the place of worship carried the “odor of racism and xenophobia” and would not go unpunished.