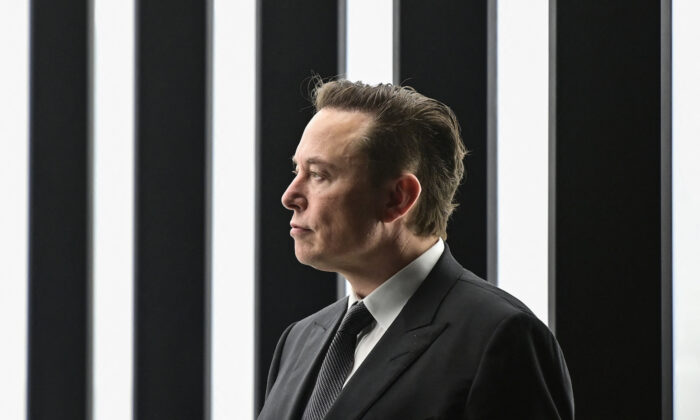 Tesla CEO Elon Musk is pictured as he attends the start of the production at Tesla's "Gigafactory" in Gruenheide, southeast of Berlin on March 22, 2022. (Patrick Pleul/Pool/AFP via Getty Images)
Viewpoints

Musk Twitter Purchase Could Wake Up the Woke Silicon Valley

Elon Musk is now the largest shareholder of the notoriously far left Silicon Valley company Twitter. His purchase was motivated by his support of free speech and his opposition to woke cancel culture.

The move could pave the way for other leaders to stand up to the woke mob and go back to running their companies in the best interest of customers and shareholders. But it will not be easy.

Until now Twitter has fallen in line with, if not led, other Silicon Valley companies in appeasing the left. Most infamously, it banned the President of the United States, Donald Trump, due to his politics—while not touching Iran’s Ayatollah or Russia’s Putin accounts. It also censored tweets critical of China, questioning government policies on Covid, and information that could hurt Joe Biden’s campaign, like references to Hunter’s laptop.

All of this is par for the course in the Valley. Google’s YouTube and Facebook/Instagram censored similarly. Amazon also censors books it deems too right leaning, such as “A Parent’s Guide to Preventing Homosexuality.” And Apple led the way in banning Alex Jones’ “InfoWars” as “hate speech.”

They all support left causes like Black Lives Matter. Facebook donated $10 million to racial justice organizations, YouTube $100 million to black creators, and Apple and Google hundreds of millions to racial equity initiatives. (They no longer can give to the Black Lives Matter organization since it was deemed so corrupt that California banned it from accepting further contributions.)

You also have Amazon’s Jeff Bezos buying and operating the left leaning Washington Post, and Facebook’s Mark Zuckerberg giving over $400 million with the advice of Obama’s campaign manager David Plouffe to non-profits to help count votes in the 2020 presidential campaign (primarily in Democratic districts).

These companies take actions to appease the left that on their face go against their own interests. Twitter never received more attention than when Trump was President, yet it deplatformed him! This gave rise to a competing company, Parler. YouTube’s censorship of COVID-19 information gave rise to a new competitor, Rumble.

Are these business tycoons, barons of industry, truly of the left? Do they really think big government, socialism, censorship, and woke-ism is the best path forward for America? Unlikely. In fact, insiders report that Zuckerberg is far from it. His politics are best described as libertarian. So why do they support these leftists causes? There are three likely explanations.

First, they are multibillionaires seeking to protect their wealth. (Bezos is worth an estimated $185 billion!) They are a natural target for the left which foments class warfare and is obsessed with “income inequality.” If you oppose these notions, you become a target. Despite supporting them, Bezos has still been a big target. Protestors at Occupy Wall Street and Black Lives Matter events held signs saying, “Tax Bezos.” They have marched numerous times on his home. Tens of thousands signed petitions stating, “ Do not allow Jeff Bezos to return to Earth” when he went into space! They looted his Whole Foods market. Appeasing the left is about protecting wealth, but also about protecting their own safety.

Second, it is the left which demands censorship. The left invented cancel culture. They label opposing views conspiracy theories which must be kept from the undiscerning public. Information about COVID-19 that goes against the approved narrative, they argue, is dangerous. Politicians are even pressuring them to censor these things. So, naturally, the companies comply.

Third, their huge Silicon Valley workforces consist primarily of Millennials, a generation well indoctrinated by the left. They expect not only to be highly compensated, but for their job to provide little stress and maximum flexibility. If they are required to come to the office, it better have outlets for recreation like ping pong and pool, as well as cappuccino made to order and beer on tap at 5 pm. They also expect management to share their views about social justice. If they do not, they expect them to go.

Case in point: They ousted Palmer Luckey, the founder of Oculus virtual reality goggles which he had sold to Facebook for $3 billion. Zuckerberg kept Lucky on to oversee the business. But all heck broke loose when employees learned that Luckey had given $10,000 to a group opposed to Hillary Clinton’s 2016 presidential campaign. The Wall Street Journal reported that Zuckerberg had to draft Luckey’s public apology, which stated, “I am deeply sorry that my actions are negatively impacting the perception of Oculus and its partners.” He was forced out of the company within six months.

Vivek Ramaswamy, CEO of the multi-billion-dollar biotech company Roivant Sciences, also stepped down in the face of employee opposition to his conservative views. He went on to write the book, Woke, Inc.: Inside Corporate America’s Social Justice Scam. He explained his departure. “I’m fed up with corporate America’s game of pretending to care about justice in order to make money. It is quietly wreaking havoc on American democracy. It demands that a small group of investors and CEOs determine what’s good for society, rather than our democracy at large. … Wokeness has remade American capitalism in its own image.”

Musk has said similarly: “At its heart, wokeness is divisive, exclusionary, and hateful. It basically gives mean people a shield to be mean and cruel, armored in false virtue.”

Musk’s effort to limit censorship and promote free speech by taking over Twitter will be closely watched by the other tech titans. If he can survive and achieve his objectives, it could embolden them to change course. The left is aware of this and has stepped up their attacks on Musk. This war is likely to get worse before it gets better.