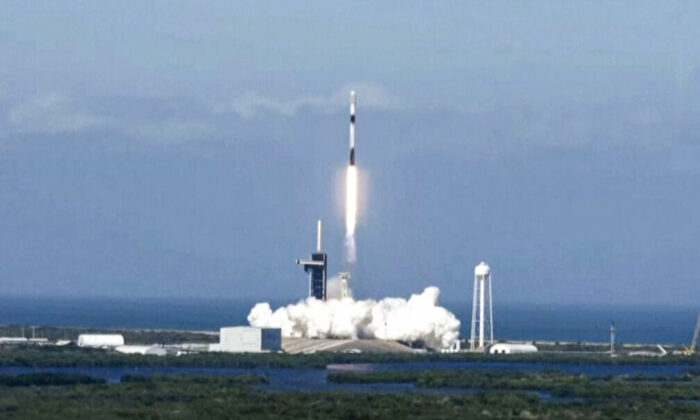 In a still from video, a Falcon 9 rocket carrying a batch of 49 Starlink satellites launches at the Kennedy Space Center in Cape Canaveral, Fla., on Jan. 3, 2022. (Screenshot/SpaceX via AP)
Space

SpaceX CEO Elon Musk anticipated cheaper flights to space with his Starship rockets in a presentation at the company’s facility in southern Texas, while highlighting the necessity of human beings colonizing multiple planets and moons.

In just two to three years, Starships will be able to reach orbit at just $10 million per flight, Musk said during the presentation. The $10 million cost estimate includes all expenses involved in launching a Starship and could be lower if fixed costs are excluded. As more Starships launch, Musk predicts prices to become even cheaper.

Though Musk did not provide a timeline for his company’s moon and Mars missions, the billionaire entrepreneur did assert his desire to see humanity colonize other planets. “What’s the deep meaning behind this? Why make life multi-planetary? I think this is just an incredibly important thing for the future of life itself,” Musk said.

“There’s always the chance something could wrong on earth. I’m naturally an optimist, so I think the probability of that is low, but not zero,” he said. “Eventually the sun will expand and destroy all life. So it’s very important, essential, that we become a multi-planetary species.” Calling civilization a “little fragile these days,” Musk also put forward the idea to build a self-sustaining city on Mars.

The Starship rocket system consists of a 230-foot Super Heavy booster and a 160-foot spacecraft. According to SpaceX, the spacecraft can carry up to 100 people or equivalent cargo.

The vehicle was designed to carry over 100 tons to the moon and other destinations. SpaceX is aiming at eventually having three Starship flights per day. Musk believes that, in the future, one Starship could be built every three days, with up to 10 Starships launched three times a day. This kind of advancement would be foundational for establishing a colony on Mars.

Musk expressed that he is “highly confident” about Starship making it to orbit this year. Back in 2019 during his last presentation on the topic, Musk had promised that s Starship orbital flight would happen within months and the rocket will carry people on a mission in just a year.

It was only in May last year that Starship was able to launch and come back to the ground after several initial takeoffs ended up in flames. The rocket traveled for roughly 6 miles during this trip.

At present, SpaceX has two Starship launch sites—Starbase in South Texas and NASA’s Kennedy Space Center (KSC) in Florida. The company is also transforming two deepwater oil rigs into launch platforms, one of which is expected to become operational by the end of this year.

Musk warned that the initial orbital flights of Starship might not go ahead as planned. “We’ll probably lose a few vehicles along the way. With Falcon 9, I think it took us 14 or 15 attempts to successfully land the first booster,” he said.

The Federal Aviation Administration (FAA), which is tasked with regulating space launches, is reviewing SpaceX’s launch plans for Starship, checking how it would affect the environment. Musk is hopeful that FAA approval might come in March.