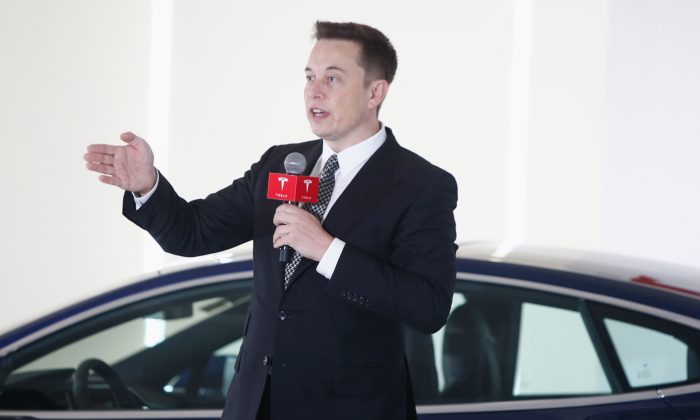 Elon Musk, Chairman, CEO and Product Architect of Tesla Motors, addresses a press conference to declare that the Tesla Motors releases v7.0 System in China on a limited basis for its Model S, which will enable self-driving features such as Autosteer for a select group of beta testers in Beijing, China, on Oct. 23, 2015. (VCG/Getty Images)
Companies

Elon Musk has engaged in Twitter spats with a long line of folks, from rival automakers to short sellers and the Securities and Exchange Commission.

He’s at it again, but this time the stakes could be even higher. He’s in a rare public dispute with a critical supplier: Panasonic Corp., the company that makes all of the lithium-ion battery cells that power Tesla Inc.’s electric vehicles.

The rift started with reports the companies are tempering expansion plans at their jointly operated battery plant near Reno, Nevada. Musk shot back in tweets that Panasonic is the culprit by operating at a pace that’s constrained production of Tesla’s Model 3 sedan.

Even by Musk’s standards, it’s highly unusual for a company and its largest supplier to duel so openly. And the tiff once again raises questions about Tesla’s ability to sustain profitability amid concerns about demand. Tesla delivered just 63,000 cars globally in the first quarter, compared with almost 91,000 in the previous three months. Panasonic’s apparent reluctance to boost battery production only adds to the skepticism—and it may portend greater troubles.

“Tesla and Panasonic need couples counseling ASAP,” said Craig Irwin, an analyst at Roth Capital Partners. “This is looking like a much more acrimonious relationship.”

Tesla shares fell 1.9 percent to $268.12 shortly after the open of regular trading April 22. The stock has slumped 19 percent this year.

Tesla and Panasonic have been joined at the hip since the gigafactory agreement was first announced in July 2014, even if on paper they’re a bit of an odd couple. One is a 16-year-old maker of electric vehicles run by an impetuous boss, the other a century-old conservative Japanese manufacturer.

Tesla manages the gigafactory but Panasonic is the principal partner, responsible for churning out cylindrical lithium-ion battery cells that Tesla buys and then packages into battery packs for the Model 3 sedan. The goal was to produce 35-gigawatt hours, or GWh, of cells per year by 2020, enough for roughly 400,000 Model 3s.

But two weeks ago, Osaka-based Panasonic shocked the investment community when the Nikkei newspaper reported that Tesla and Panasonic were freezing plans to expand capacity beyond the initial 35GWh amid concerns about Tesla’s sales.

“Panasonic is a 101-year-old company,” said Chris Redl, senior portfolio manager at Gordian Capital Japan. “It’s extremely rare for a Japanese company to publicly air its grievances about a top customer via a story in the Nikkei.”

Musk said that Panasonic’s cell lines have actually constrained Model 3 assembly because they are operating at just two-thirds capacity or 24GWh.

Panasonic did not directly respond to that assertion. But it said in a statement this week that as of the end of March, the plant does have capacity for 35GWh. Both companies are in agreement that the gigafactory is far from running at full production. What’s less clear is why and how they will proceed in the future.

“Tesla won’t spend money on more capacity until existing lines get closer to 35GWh theoretical,” Musk said in a tweet.

Most analysts said they believe slow Tesla sales warranted capping battery-production lines. But another explanation offered up is that Panasonic is unhappy about a third party possibly messing up their marriage. While it is currently Tesla’s only supplier of automotive-grade batteries, Tesla is building another factory in Shanghai and has talked with several Chinese-based suppliers, including CATL.

“Tesla is starting to flirt with other battery makers in China, and Panasonic doesn’t like that,” said Sam Jaffe, managing director of battery consulting firm Cairn ERA.

Tesla declined to comment beyond Musk’s tweets. It has warned investors that it expects first-quarter net income will be negatively impacted by lower-than-projected vehicle deliveries and multiple price cuts. Tesla is having an Autonomy Investor Day at its headquarters in Palo Alto, California, on April 22 and will report earnings April 24.

This isn’t the first time the two companies have struggled to match production lines. In a November interview with Bloomberg, Panasonic President Kazuhiro Tsuga said that in 2017, Panasonic held back while Tesla worked through problems in its automation line. Then in 2018, as car output ramped up, it was Panasonic who lagged. Tsuga said the output on both sides was close to being evenly matched in early November, and two additional cell-production lines would be added.

The two companies are intertwined to a degree that any permanent split is likely out of the question, Roth Capital’s Irwin said. Panasonic needs Tesla for the stability it brings to its battery business, he said, while “Tesla has nothing in batteries without Panasonic.”

Still, the now-public rift shows how Panasonic may be worried about Tesla’s future, said Kazunori Ito, an analyst at Morningstar Investment Services in Tokyo.

“With EV sales not growing as expected, Panasonic is increasingly unwilling to take risks,” Ito said. “Where it used to be two companies sharing a common destiny, it’s clear that Panasonic wants to distance itself from Tesla, and Tsuga is beginning to draw a line. Musk cannot be happy about that.”