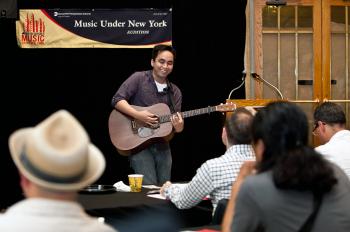 By Zachary Stieber
Print
NEW YORK—Musicians and ensembles vied for highly coveted spots on the Music Under New York (MUNY) roster at the 24th annual auditions in Grand Central Terminal on Tuesday.

Only 20 new performers will be added to the current roster of more then 350 individuals and groups who present 7,500 weekly performances in 25 transit locations.

A panel including musicians, music and performing arts professionals, and MTA representatives assessed the musicians based on quality, variety, and how well they would harmonize with a bustling transit environment.

“Music and art create a welcoming, friendly, and even fun environment; bringing humanity and spirit to New Yorkers every day,” said MTA chairman Jay H. Walder in a press release.

Tricia Davis, a pop and R & B singer shared her thoughts, “I felt good, the judges smiled, they were very inviting and kind-looking, not very intimidating, so I felt comfortable.” She usually performs at events like weddings and birthdays. Her mom found out about the auditions and Tricia was selected after submitting a video.

There was a diverse selection of instruments like the Chinese erhu, Baroque harp, and Appalachian Dulcimer. Genres included folk, classical, blues, and opera.

An example of the diverse offerings was Brazilian Quarter, an ensemble that played Brazilian/New Orleans music. They featured a variety of instruments including the pandeiro (Brazilian tambourine), tuba, clarinet, piccolo, trombone, and bandolim (Brazilian mandolin).

Raycurt Johnson, a current MUNY musician, was performing in Grand Central even before MUNY was created. “Thank God for MUNY, it's a great forum for aspiring artists to present themselves,” he said in a telephone interview. When asked how much subway musicians make on an average day he responded, “The sky's the limit. You can make a million or you can make two cents.”

The new additions to MUNY will receive personalized MUNY banners to display during their scheduled performances. MUNY began as a pilot program in 1985 before becoming official two years later. Its purpose is to augment people's transit riding experience.

“That was about as nervous as I've ever been performing,” said Mike Lunapiena, a cello player, “It's really something that means a lot to me. It's really great to get exposure to all these different cultures and music, as a performer I get to connect with all these people and share what I do.” He talked about how performing on the subway is more low-key compared to a stage, and the musician is able to take a break and talk to people. The audition piece he played was created on the subway.

Muhummad, a management agent for the terminal, was one of the judges. He said the performers “had ups and downs, most of them have been good.”

Jay Legaspi, a singer-songwriter auditioned, singing and playing guitar. Last year, he came out with his full-length debut. Legasi’s Myspace page describes him as, “Very quiet as a child, Jay broke his silence when he began writing his own songs on an old nylon string guitar.”