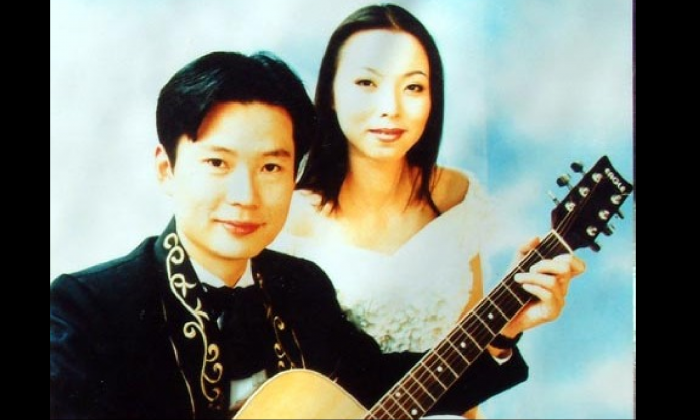 Li Jingsheng and his wife Wan Yu when they performed together in the late 1990s. (Minghui.org)
China Human Rights

Musician Regains Health and Hope, Only to Be Tortured to Death for His Faith

When Li Jingsheng was 5 years old, he was diagnosed with congenital heart disease complicated by a condition that caused the vein and artery blood to mix. Even a small amount of exertion caused shortness of breath and his lips and face would turn black.

As he grew up, he could never play with other kids or engage in normal physical activities. His doctors said surgery was too dangerous, and that people with this problem usually die in their teenage years.

Li was smart and talented in music, but he couldn’t go to college due to his poor health. Nevertheless, he learned to play guitar through his own arduous efforts and went on to teach the instrument at three different universities in Beijing. He also published two guitar instruction manuals.

In February 1997 when he was 32, Li married Wan Yu. The following November, after they had moved to Shenzhen, a major city in southern China, his health deteriorated to the point that he was coughing up copious amounts of blood and had to be hospitalized several times. Medical experts told him that the functioning of his heart and lungs was very weak, and there was no solution except to stay home and rest.

The implication was that all he could do was wait to die.

It was around that time that Li came across Falun Gong, an ancient spiritual practice also called Falun Dafa that was made public in 1992 and spread rapidly across China and, later, around the world.

He took up the practice, with its meditative exercises and teachings based on the principles of truthfulness, compassion, and tolerance, and before long his health began to improve. He had more energy, and he no longer needed to take medication to control his heartbeat. Later, Wan started practicing as well.

With his new lease on life, Li got a job singing and playing guitar in the restaurant of a 4-star hotel. Wan sang with him. As he continued to practice Falun Gong, he became increasingly stronger and healthier.

“It is quite exhausting to play the guitar and sing continuously. It is amazing that a person who had been sentenced to death by the doctors was able to do this. This is the manifestation of Falun Dafa’s power,” Wan wrote in an article posted on Munghui.org about her life with Li.

“Moreover, Jingsheng went from being a selfish person to a selfless person who always considered others first. Because of his health problems he had a very bad temper, but after learning Dafa, he was able to control his temper and always looked inward when encountering conflicts.”

Wan said they performed at the hotel for a year, and she has fond memories of those days.

“That year was the happiest one of my life. We went to a nearby park at 5:30 a.m. every morning to do the exercises, then to the group Fa-study, and then to the hotel to sing at night. … We were happy, and our lives were full and meaningful,” she wrote.

But dark times lurked on the horizon.

In July 1999, the Chinese regime launched a brutal persecution campaign against Falun Gong. Adherents across the country were rounded up in the thousands and thrown in detention centers, prisons, labor camps, and brainwashing centers, where they were mistreated and tortured in an effort to force them to quit practicing. The aim of the regime was to eradicate Falun Gong, and its campaign to that end continues unabated today.

After going to Tiananmen Square in Beijing to appeal for the right to practice in June 2001, Li became a victim of the persecution campaign. He was violently kicked in the ribs by a policeman, arrested, and incarcerated in the Tuanhe Forced Labor Camp for 18 months.

In the camp, he was deprived of sleep and food. He was beaten by several policemen, resulting in his arm being permanently injured. He was tied to a big wooden board for long periods, unable to move.

In intensive brainwashing sessions, he was forced to sit on a small stool for more than 10 hours—a common tactic used against Falun Gong prisoners of conscience in an effort to “transform” them by forcing them to write the so-called “three statements” renouncing the practice.

Li went on a hunger strike numerous times to protest the abuse, resulting in the authorities extending his sentence by 10 months. Falun Gong practitioners who undertake a hunger strike are often force-fed, which becomes yet another form of torture. Some have died from force-feeding, according to Minghui.

The ongoing torture damaged Li’s sight and hearing, and he also suffered brain damage. As a result, his reactions became very slow.

Meanwhile, Wan wasn’t allowed to visit him at the camp until the beginning of 2003.

“I was told that I could go visit him because he had already been “transformed,” she said.

“When I saw him, he was very weak. Even walking was hard for him because he had just ended a hunger strike. It is said that he had been on more than 50 hunger strikes, which is the most in Tuanhe Labor Camp. Because we were being watched, we could not express our real thoughts, but I could tell that he was in serious pain.”

When Li was finally released in October 2003, his body was swollen, and he was not only extremely weak but also depressed.

“When he got home, he was so weak that he had to lie in bed all the time,” said Wan.

“He was also very depressed because he had given in to the pressure to renounce his beliefs. Under the torture in the labor camp, he wrote the three statements. He was overcome with regret and self-blame. He knew that Dafa had given him life, but he gave in to the evil under torture and did things that betrayed his conscience. He was suffering severe physical pain and mental anguish.”

When he felt a bit stronger, Li wrote a “solemn declaration” and had it posted on Minghui to invalidate the renunciation statements he’d been forced to write in the labor camp. Many Falun Gong practitioners who have been forced to renounce the practice against their will while incarcerated write such declarations after being released.

The swelling in Li’s body kept getting worse, however, and although Wan sought medical help, he continued to get weaker.

“After suffering the long-term imprisonment, the brutal torture, long-term confinement in a small cell, and having all contact with others cut off, both his body and mind were badly injured. After his release, the huge mental pressure and pain caused by the evil Chinese Communist Party’s terror made him unable to completely recover,” she said.