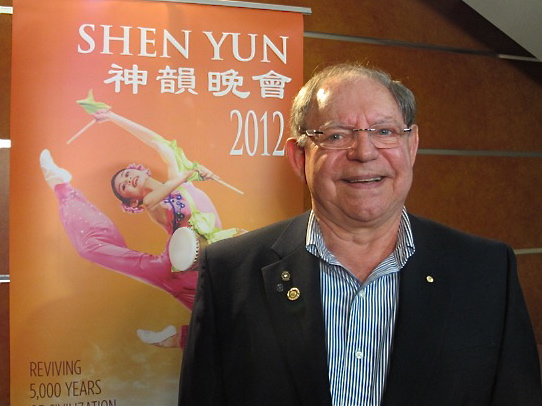 SYDNEY—George Papallo, former college CEO and amateur musician, said Shen Yun Performing Arts was a beautiful blend of the many aspects of culture and he would bring more of his family with him to see it next year.

Speaking during intermission at Sydney’s Capitol Theatre on Saturday night, April 28, Mr. Papallo said he was enjoying the performance “very much.”

“It’s a very exciting program,” Mr. Papallo said. “It’s a beautiful blend of so many parts of culture. You see the music, the art, the modern technology. The blending of modern, Western music with the Eastern instruments as well is something I enjoy very much.”

Shen Yun, a New York-based dance company, established in 2006 by a group of overseas Chinese artists, states its mission as reviving 5,000 years of Chinese culture. Central to the performance is the extensive discipline of classical Chinese dance, and the company also travels with a unique orchestra that blends Eastern and Western instruments.

“To see the erhu, the Chinese violin, together with the Western instruments is a beautiful blend and it was very exciting for me to hear that,” Mr. Papallo said.

The performance also makes use of cutting edge graphic design technology. Shen Yun dancers perform in front of, and interact with, high-tech digital backdrops, which bring to life scenes from various regions and dynasties of China, and magical beings.

Mr. Papallo was formerly the CEO of a large community college teaching adult education. He is also an amateur musician and plays the piano and the clarinet. He attended the Saturday night performance with his wife.

He said a highlight was the Tibetan dance Khata for the Gods. The dancers in this piece step and stomp, spin and soar with joyful, vibrant energy. In their hands they hold the khata, a traditional scarf, which in the dance, is offered to the gods as a sign of reverence and devotion, describes the program book.

He said Shen Yun had done a good job promoting the various cultures and traditions of China and combining them into one show.

“I think you see the fineness and delicateness of the Chinese culture comes out so well, and also the talent of the physical agility of the dancers, the wonderful choreography that is so clever. It all blends beautifully. It’s so good.”

He said his daughter, a professional musician, would enjoy the show.

“Next year I will make it a point to let her come and see this. I think she will enjoy it very much.”