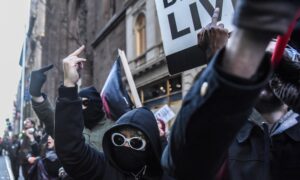 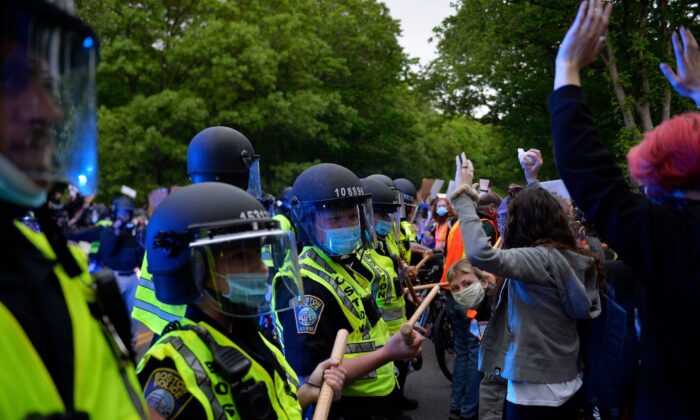 Protesters confront a row of police officers at a demonstration in Franklin Park in Boston, Mass., on June 2, 2020. (Joseph Prezioso/AFP/Getty Images)
US News

Berklee College of Music said it was “deeply sorry” for opening the school’s restrooms to police officers who were stationed nearby following a protest in Boston.

Berklee’s president Roger Brown, who is set to leave his position next year, said in an apology letter to the school community that allowing the officers inside had caused “feelings of oppression, silencing, and marginalization.”

Brown confirmed in the letter that after a protest on May 31, Boston police officers were staying on guard at an intersection near the campus, and they were allowed to use the restroom facilities in the college’s performance center. The Berklee Public Safety Department later clarified on Facebook, saying that was not a formal decision by the institution, but an “informal one, made on the spot.”

“We have learned from many of you personally and across social channels of your hurt and anger that this access was permitted, especially as the facility is not currently open for students and members of our community,” the letter continues. “Allowing police officers into the space was in no way meant to undermine Berclee’s support of Black Lives Matter.”

“Let us assure you,” Brown wrote. “This should not have happened, and going forward, it will not happen again.”

The apology letter has faced criticism on social media, including from Reason’s editor-at-large Matt Welch and conservative filmmaker Dinesh D’Souza.

“And who will the Berklee College of Music call when rioters surround it and start burning it to the ground?” wrote D’Souza on twitter. “Do they have a music performance planned for that occasion?”

The apology comes as Boston Mayor Marty Walsh, a Democrat, announced his plan to transfer a total of $12 million, or 20 percent of the police overtime budget for the 2021 fiscal year, to other programs such as health care.

Meanwhile, Massachusetts’ Republican Gov. Charlie Baker said he didn’t support calls to “defund the police,” but he was willing to work with minority communities to create a police certification process for more transparency and accountability in law enforcement.

“I’m not a big believer at the end of the day that the right way to solve a number of problems is to so-called defund the police,” said Baker, in response to Walsh’s announcement. “I do believe in more accountability and transparency and as I said yesterday, we’ll be filing legislation on that next week that we’ve been working with the black and Latino Caucus on for quite a while.”