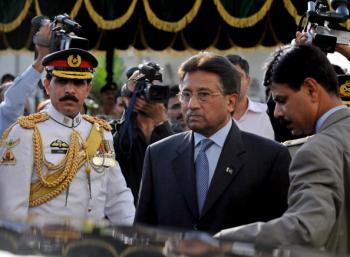 Mr Musharraf, 65, who took control of Pakistan in a bloodless coup in 1971, stepped down on Monday August 18. (Farooq Naeem/AFP/Getty Images)
World

Jubilation was widespread in the streets of Pakistan this week as President Pervez Musharraf announced his resignation, but many fear that the President’s removal will see turbulent times ahead.

Mr Musharraf, 65, who took control of Pakistan in a bloodless coup in 1999, stepped down on Monday August 18 after a six-month standoff with the governing coalition.

With Mr Musharraf gone, the struggle is now widely seen to be between Coalition leaders as former Prime Minister Nawaz

Sharif, ousted by Mr Musharraf in 1999, and Asif Ali Zardari, widower of Benazir Bhutto, fight to assume the President’s power.

Dr Peter Mayer, an expert in Asian politics at Adelaide University, says the struggle will be volatile.

“I think, almost certainly, the glue that held this democratic Coalition together between the PPP of Benazir Bhutto and her husband, and the Muslim League of Zardari, has been mutual antipathy to Musharraf,” he told The Epoch Times.

“Once he has gone, that glue has gone and I don’t think you have to be too much of a pessimist to say we have a rough six months ahead.”

“Both Zardari and Sharif want to run for it and my guess is neither of them will get it, and Pakistanis will come to their senses and appoint a suitably distinguished Pakistan high court judge or something like that.”

Mr Musharraf’s downfall has been partly attributed to his attack on the judiciary earlier in the year, when he sacked Chief Justice Iftikhar Mohammad Chaudhry.

Justice Chaudhry had long been outspoken about human rights and government misdeeds, and his sackings provoked rallies around the country.

Thousands turned out in the streets around the country to celebrate Mr Musharraf’s downfall, with widespread dancing and singing reported.  “I am happy he has gone because he is a dictator,” Raja Zaheer, an office worker, told The Independent.

“Military rulers have controlled the country for too long.”

The military had been remarkably quiet over Mr Musharraf’s resignation, which is widely understood as a move to prevent the humiliation of impeachment. It would have been the first impeachment in the country’s 61-year history.

Dr Mayer said the military had seen the “writing on the wall” for Mr Musharraf and were remaining quiet in the interim.
How long that would last, however, remains to be seen.

He is tipping fresh elections in Pakistan early in the year and with the civilian push, the military may not be so quiet.

“All previous civilian governments have been undone by the military and unless Pakistan can break out of that rather dismal deadly cycle, one has to assume that at some point, these civilians may be seen to have gone too far and the supremacy of the military is threatened.”

At that point, they may step in again, he said, “but that is a bit down the track”.