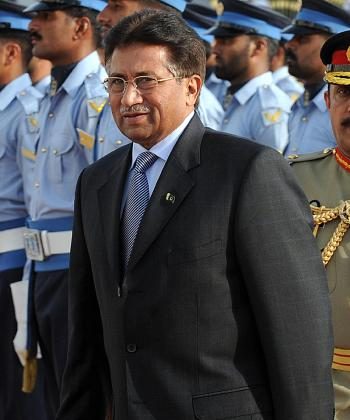 Pakistani President Pervez Mushararf walks away after a farewell ceremony before leaving the presidency in Islamabad. (Farooq Naeem/AFP/Getty Images)
World

“I have decided to resign from the office of President and my resignation will be handed over to the Speaker of the National Assembly,” Musharraf said in his address to the nation on Monday.

The announcement came as no surprise, since public approval of the ex-general was plummeting and the coalition government, headed by Benazir Bhutto’s Pakistan People’s Party, began initiatives to impeach him and force him out of office.

Musharraf ruled Pakistan with an iron fist, increasingly to the disdain of Pakistanis. In November 2007, Musharraf suspended the Constitution, declaring a State of Emergency across Pakistan. He sacked the chief justice of the Supreme Court, put other Supreme Court justices under house arrest, and deployed troops to control all media outlets.

Economists and analysts suspect the political chaos to be a significant contributor to the falling rupee and deteriorating economic conditions in a country plagued by slumping investor confidence and sky-high inflation.

For these reasons and more, the coalition government went ahead with the impeachment process of Musharraf nearly two weeks ago.

Musharraf blasted those impeachment measures in his announcement, saying that even though “impeachment and charge sheet is the right of the Parliament … I am confident that no charge can be proved against me. All my actions were for the good of the people and the country.”

“Whether I’m impeached or not, the country’s stability will be compromised,” Musharraf said. “The office of the president will also be insulted.”

Many Pakistanis wouldn’t agree: people filled the streets of Karachi, the capital city, to celebrate Musharraf’s resignation, dancing and handing out sweets.

Mohammadmian Soomro, the current chairman of the Senate, will be the acting president until a new head of state is elected in the next 30 days.

Musharraf has been a strong supporter and ally of the U.S.-led War on Terror ever since the September 11 terrorist attacks in 2001.

The Bush administration considered Musharraf a valuable friend, and President Bush praised Musharraf for his role in the War on Terror.

“President Bush appreciates President Musharraf’s efforts in the democratic transition of Pakistan, as well as his commitment to fighting al Qaeda and extremist groups,” Gordon Johndroe, Deputy Press Secretary for the President said. “President Bush looks forward to working with the government of Pakistan on the economic, political and security challenges that they face.”

Secretary of State Condoleezza Rice echoed Bush’s tribute to Musharraf. “President Musharraf has been a friend to the United States and one of the world’s most committed partners in the war against terrorism and extremism,” she said in a statement. “For this, he has our deep gratitude.”

Presidential candidates John McCain and Barack Obama shied away from extolling Musharraf. Instead, both released statements suggesting that the resignation of Musharraf was a victory for Pakistan.

“The resignation of President Pervez Musharraf is a step toward moving Pakistan onto a more stable political footing,” said McCain.

Obama claimed that Musharraf’s resignation was “in the interests of his country” and urged the “Pakistani people to end the political crisis that has immobilized the coalition government for too long.”

“I hope all of Pakistan’s friends will now seize the opportunity created by Musharraf’s exit to focus on the urgent issues of today: confronting the threat of extremist violence, dealing with food and energy shortages, and helping the Pakistani people build a stable, secure, democratic future,” Obama said.