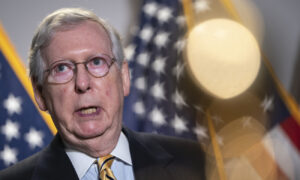 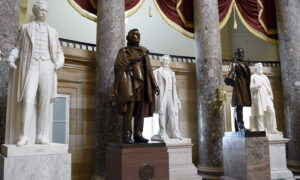 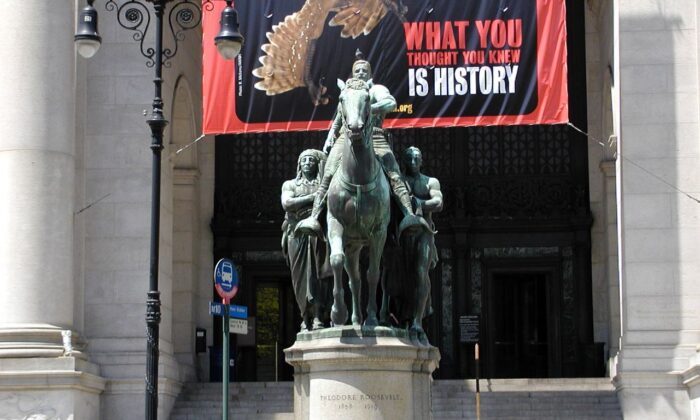 A statue of Theodore Roosevelt by the entrance to the American Museum of Natural History in New York City will be removed, the city announced on June 21.

In a statement Sunday evening, New York City Mayor, Democrat Bill de Blasio, said the request to remove the bronze statue of the former president was made by the museum.

The statue, which is owned by the city and has presided over the museum’s Central Park West entrance since 1940, depicts Roosevelt on horseback while flanked by a Native American man and an African man.

“The American Museum of Natural History has asked to remove the Theodore Roosevelt statue because it explicitly depicts Black and Indigenous people as subjugated and racially inferior,” de Blasio said in a statement.

“The City supports the Museum’s request. It is the right decision and the right time to remove this problematic statue,” he said.

The Equestrian Statue in front of the Museum has long been controversial for the racial hierarchy it depicts. The Museum has asked that it be moved. More: https://t.co/3hgIWe0fqu pic.twitter.com/m99Bl1EEFT

The move follows waves of protests across the United States over the death of George Floyd on May 25 in Minneapolis. He died after a city police officer knelt on his neck for nearly eight minutes.

Statues have been toppled and vandalized across multiple states, with opponents of Confederate memorials decrying them as an affront to African-Americans and the ideals of racial equality.

Supporters of keeping the statues meanwhile argue they represent an important part of history or that any actions to remove or move statues should go through a round of consultation.

In a statement on its website, the Museum of Natural History said that the statue of the 26th president was unveiled to celebrate Roosevelt as a devoted naturalist and author of works on natural history.

“Roosevelt’s father was one of the Museum’s founders, and the Museum is proud of its historic association with the Roosevelt family,” the museum said. “At the same time, the statue itself communicates a racial hierarchy that the Museum and members of the public have long found disturbing.”

“Over the last few weeks, our museum community has been profoundly moved by the ever-widening movement for racial justice that has emerged after the killing of George Floyd,” the museum’s president, Ellen V. Futter, told The New York Times on Sunday.

“We have watched as the attention of the world and the country has increasingly turned to statues as powerful and hurtful symbols of systemic racism,” she added of the museum’s view. “Simply put, the time has come to move it.”

The equestrian statue was previously vandalized in October 2017 by a group who identified themselves as members of the Monument Removal Brigade. They called for its removal as the statue could be seen an emblem of “patriarchy, white supremacy, and settler-colonialism.”

It is not yet clear what will happen to the bronze statue or when it will be removed.

President Donald Trump on Saturday denounced the forceful toppling of statues of American historical figures nationwide by rioters, describing the actions as a “cruel campaign of censorship and exclusion” that “violates everything we hold dear as Americans.”

“They want to demolish our heritage so they can impose their new oppressive regime in its place,” the president said before a crowd at his reelection campaign rally in Tulsa, Oklahoma—the first since March, when the CCP (Chinese Communist Party) virus pandemic put a halt to all in-person campaign events.

Though it’s unclear who exactly is behind each monument’s desecration, Attorney General William Barr said recently that the Department of Justice had evidence that Antifa and other similar groups have “hijacked” initially peaceful protests triggered recently by Floyd’s death.

The president said at the rally that an “unhinged left-wing mob” is attempting “to vandalize our history … tear down our statues, and punish, cancel, and persecute anyone who does not conform to their demands for absolute and total control.”

“We’re not conforming,” he said.

Theodore Roosevelt IV, Roosevelt’s great-grandson and a museum trustee, welcomed the decision to remove the statue.

“The world does not need statues, relics of another age, that reflect neither the values of the person they intend to honor nor the values of equality and justice,” he told New York Times. “The composition of the Equestrian Statue does not reflect Theodore Roosevelt’s legacy. It is time to move the statue and move forward.”