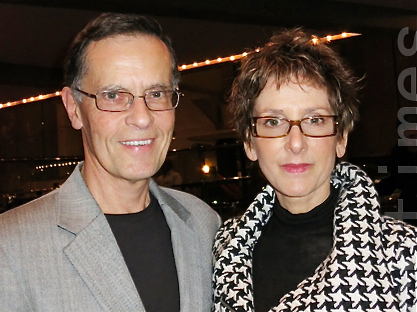 “It’s a great presentation. We’re thrilled,” said Mr. Kaltenbaugh. “We’re very impressed with the costumes, the athleticism of the dancers, we like the precision, we like the colors.”

As part of its 2012 World Tour, Shen Yun Performing Arts is in Tampa this weekend for three shows at the Straz Center for the Performing Arts. All of the Tampa shows are sold out.

Shen Yun Performing Arts was established with the mission of bringing to life 5,000 years of divinely inspired Chinese culture. Ms. Lester was touched by the beautiful heritage of traditional China, which was imparted and refined among the royal courts and people of China over thousands of years.

“The tradition is beautiful,” Ms. Lester said. “We are missing some of that here in this country, so it’s beautiful to see we honor that.”

She also enjoyed the animated backdrops projected behind the dancers, which lift the stage and transport the audience to different realms.

“There is technology here as well as tradition,” said Ms. Lester. “The art form is obviously traditional and then you bring in the startling graphic where the picture becomes the actual. It’s quite striking. I think it’s very clever.”

Mr. Kaltenbaugh, who plays the guitar, trumpet and piano, was impressed with the Shen Yun Orchestra.

“The music is phenomenal,” he said. “The orchestra is exceptional.”