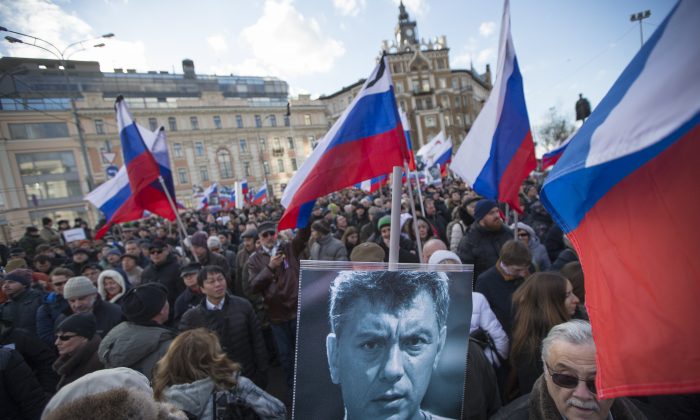 Demonstrators hold a portrait of slain opposition leader Boris Nemtsov and Russian flags during a march marking the one-year anniversary of his killing, in Moscow, Russia, on Feb. 27, 2016. Several thousand people took part in the march. (AP Photo/Ivan Sekretarev)
Europe

MOSCOW—More than 20,000 people marched across downtown Moscow Saturday in memory of the slain Russian opposition leader Boris Nemtsov to mark the first anniversary of his killing.

Nemtsov was shot to death late at night as he and a companion walked across a bridge overlooking the Kremlin. The brutality so close to the center of Russian power both frightened and angered supporters of the beleaguered opposition.

Nemtsov, who had been a deputy prime minister during Boris Yeltsin’s presidency, was a charismatic figure and a vehement critic of President Vladimir Putin.

“He was the embodiment of freedom and courage, he was a model for me,” said marcher Kamala Igamberdiyeva, a 26-year-old accountant. “We still have a chance if the opposition shows wisdom and unites.”

In Putin’s decade-and-a-half in power, opposition groups have come under severe pressure, criticized by officials and state-controlled media as pawns of the West. Permission for rallies is frequently denied.

Many opposition supporters say that even if Putin had no direct hand in Nemtsov’s killing, he bears responsibility for encouraging a truculent authoritarianism.

“Nemtsov’s death was the result of the atmosphere of hatred in our country,” said 78-year-old demonstrator Pavel Movshovich.

City authorities denied march organizers permission to hold a procession to the bridge, but gave permission for another route in central Moscow on Saturday. Some demonstrators also visited the bridge.

On Saturday morning, U.S. Ambassador John Tefft laid a wreath at the bridge, saying he came to express hope that “some of the dreams that Boris Nemtsov had will come true in Russia.”

Five suspects have been arrested in the killing, all of them Chechens. The suspected triggerman served as an officer in the security forces of the Moscow-backed Chechen leader, Ramzan Kadyrov.

The official probe has failed to identify those who ordered the killing, and Russian liberal opposition activists have criticized the Kremlin for the failure to track down the mastermind. Earlier this week, opposition leader Ilya Yashin released a report accusing Kadyrov of involvement in Nemtsov’s killing and demanding his resignation.

Kadyrov, whose term expires in early April, rejected the accusations. At the same time, he tried to secure his position by taking a posture of obedience.

“The nation’s leadership needs to find another person so that my name isn’t used against my people,” he said Saturday in televised remarks. “My time has passed.”

Putin has relied on Kadyrov to stabilize Chechnya after two separatist wars, making him effectively immune from federal controls. Kadyrov’s unparalleled privileges and defiant ways have earned him numerous enemies in Russia’s law enforcement agencies, whose leaders have pushed for his dismissal.