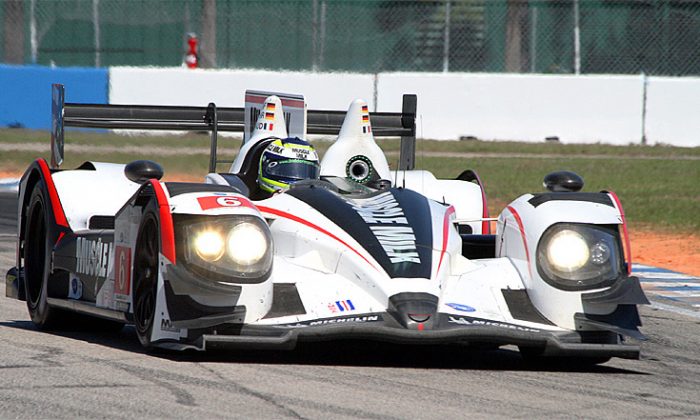 “That’s really rewarding we worked really hard on the car we got it better every session and this is the best we have ever had it here so we are quite pleased,” Graf told ESPN3. Pole didn’t mean much in the course of a six-hour race, but it meant a lot to the team and its supporters, he explained.

“We are just two hours away with our shop and the company base so we will have a lot of friends and family and guest here tomorrow so this is a good start going into the six hour race. I am very pleased for the Muscle Milk crew—they did an awesome job. We did a gearbox change after breakfast to put that in is a bit risky always but the guys did an awesome job.

“We’ve tried a few times now to get pole position here and to finally get it is quite an achievement for us,” Graf said in a team press release. “Looking ahead to Saturday, I think Lucas and I have enough experience to be smart and race smart.”

The Dyson Lola had been having issues through every practice session, and went off early in qualifying, bringing out a brief red flag, but the team fixed a broken dive plane and got back on track.

“Qualifying was disappointing,” Guy Smith told ESPN3. “Actually we have been out of sorts all weekend. We made some changes for qualifying and that’s actually the best the car’s been all weekend. I think it’s a good race car—it’s not the fastest car right now but it is a six hour race and anything can happen.”

Dempsey Racing made a very respectable debut; Jonny Cocker qualified its brand new #27 Lola-Judd third with a lap of 1:17.494, 1.56s behind the class leader but still a good time for a car which hadn’t turned a lap before practice.

Conquest had to skip qualifying after its Morgan-Nissan suffered front suspension failure in the second practice session. The team will start from pit lane.

Bruno Junqueira put the #9 RSR Oreca on the PC pole by a margin of 0.23 over Tom Kimber-Smith in the #06 Core Autosports Oreca. This class should provide some serious excitement Saturday; 0.65 seconds separated the top seven cars in the class.

“I am very happy,:” Junqueira told ESPN3. “The RSR team did a great job. My first time in the car at Sebring we were on the pole; at Long Beach we had the fastest race lap, and here in Laguna Seca we start on the pole. Now we have to try to win the race. We have had two unlucky races; I hope everything goes our way tomorrow.”

GT started out with teams taking turns at the top until Darren Turner in the #007 Aston Martin Vantage turned in an amazing lap at 1:22.229, quickest by .43 seconds. This is another class where competition should be intense; .713 seconds separate the top eight cars.

“It’s a really good feeling for everyone on the team. We were racing at Spa last weekend, this car flew out on Sunday and the guys did a good job turning it around getting ready for this weekend,” Turner explained.

“I am really pleased for every one—they worked really hard over the winter to get the GTE Vantage up to speed and it’s nice to be able get the most out of it and have a good run in qualifying.

“Now I am looking forward to the race. Anything can happen, certainly on this circuit—with the sand and everything else it makes it a little bit more tricky out there for everyone. I think if we can keep it in the top three, we will be really pleased with that. That’s got to be the goal for this weekend.”

Damien Faulkner put the #34 Green Hornet Porsche on the pole in GTC, ahead of the two TRG cars of Nick Tandy and Jeroen Bleekemolen. Faulkner pitted early in the session to have his crew work on the car’s computer, then came out and set fastest lap, winning Green Hornet its first pole.

“It’s brilliant to get the pole but obviously tomorrow’s the telling day,” Faulkner told ESPN3.

The race will stream live Saturday on ESPN3 starting at 4:15 p.m. EDT. There will be a highlight show on ESPN2 Sunday, May 13 starting at 5 p.m. EDT.