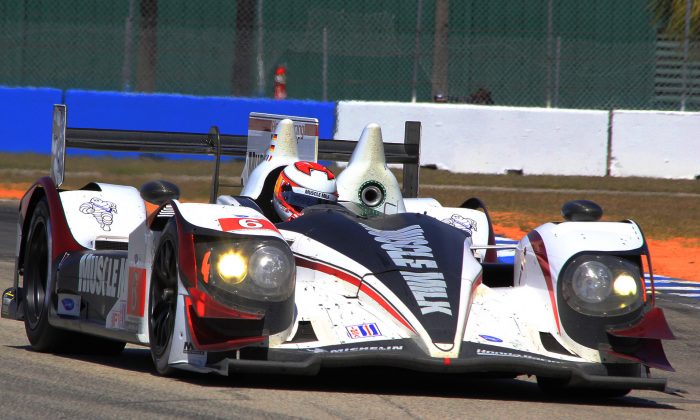 Some people say the P1 class is dead in North America; that with only four full-time entries, there simply aren’t enough cars to make the class worthwhile.

In fact, the American Le Mans Series race at Laguna Seca proved that it only takes two cars to make a great race, as the No. 16 Dyson Racing Lola-Mazda only completed 21 laps and the Delta Wing, 100, but at a pace more suitable for a GT car.

None of that mattered because the No. 12 Rebellion Lola-Toyota and the No. 6 Muscle Milk Pickett Racing HPD ARX 03a-Honda fought a four-hour battle of epic proportions.

The battle almost ended half an hour early, as Muscle Milk’s Lucas Luhr and Rebellion’s Neel Jani collided while passing one another in traffic; Luhr ended up with some flapping bodywork, while Jani suffered a puncture and had to pit. Then, a caution in the final few minutes (for the Delta Wing, which had expired at pit-in—still doing its part to help the race, as it were) closed up the field leading to a NASCAR-esque Green-White-Checker one-lap dash.

The win was Luhr’s 43 in the series, setting a new record.

“What a race,” Graf said after the race. “I think this is sports car racing at its best.

“My man Lucas drove a hell of a race. The Rebellion was a little faster on outright speed. At the end it came down to the moves Lucas made in passing Jani. They ran the same strategy, a good strategy, but today we have maybe a little better race-craft and a little more luck today for the win.”

Race Not Always to the Swiftest

The Rebellion had been quicker all weekend, quicker out of the pits, quicker in qualifying, and set a quicker fastest lap in the race, but the Klaus Graf stayed a few seconds behind, maneuvering through traffic and waiting for a chance. The team knew what adjustments to make, to gain speed, but didn’t have time while the race was green.

“In sports car racing, it’s not always about who has the quickest car,” Luhr explained in the post-race press conference. “You need to have it quickest under all circumstances and in traffic.” He would very positively prove that statement during his stint.

A yellow flag for a beached PC car with 2:40 left in the race gave the Muscle Milk crew a chance to make the needed adjustments and to change drivers, letting Luhr, who had only driven fifteen minutes at the previous race at Long Beach, get a few long stints.

“We knew what was wrong in the beginning, but Klaus did a hell of a job keeping the car on the track the way it was,” Luhr said. “We made a few changes and it got better and better. I was pleased because we made two adjustments before I got in the car.”

Luhr spent half an hour getting acclimatized to the new set-up, then turned up the volume. He caught the Rebellion and spent a dozen laps right on its wing, pressuring Jani, trying to force an error.

On lap 84 Luhr saw an opening when the two P1 cars caught the No. 55 GTE BME at the entrance to the corkscrew. Jani had the inside, so Luhr went past the BMW on the outside. Jani dropped his left-side wheels in the dirt, fishtailed, and shot across the nose of the Muscle Milk car, following Alex Zanardi’s line through the steep, sharp right-hand part of the corkscrew. Luhr avoided the Lola and stayed on track, maintaining his momentum and moving into the lead.

Now it was Neel Jani’s turn to chase through traffic, and he did, but Luhr was up to the pressure; he kept all four wheel on the pavement and the No. 6 HPD in the lead.

Another yellow flag on the next lap brought both cars into the pits; Muscle Milk got out first and preserved its lead.

Another caution let both teams stretch their fuel loads, but both teams had to pit when a third caution came one hour from the finish. Both teams did a timed fill, taking just enough fuel to finish the race but either the Rebellion engineers calculated more closely or the car is a lot more fuel-efficient; the Rebellion got away well before the Muscle Milk HPD, resuming the lead.

The track went green with 47 minutes left in the four-hour race; Lucas Luhr again showed his skill, again overtaking the Rebellion entering the Corkscrew. “I knew the Rebellion car was much quicker on the straights so I knew passing him in the corkscrew would be my only chance, so I thought, ‘I’ll go for it,’” said the Muscle Milk driver.

“The choice was good, but in the moment I thought maybe this wasn’t such a good idea now that the rumble strips were throwing my car around.”

The two P1 cars again caught a GT car entering a corner. Again Jani went inside, this time dropping his right-side wheel off the track, while Luhr took the longer route around the outside and cut sharply over after getting by the slower car. While Luhr cut right, Jani came back sharply left out of the dirt and the two cars slammed together side to side.

Jani had the inside and took the lead, but couldn’t hold it; the collision had punctured his left front tire, and he had to pit.

“We had a little coming together, but I don’t think it was anything on purpose, or mean, it was just bad circumstances,” Luhr said. “The way that he hit me, I didn’t think he was going to make the corner without me being there. I really thought, oh no, this is how it falls apart. But then I caught up to him and saw he had some damage too.

“After contact, the car was trashed, aerodynamically it was all messed up and mechanically I could feel the toe-link or something was broken. But I could fight it around.”

With Luhr half a lap in the lead with 34 minutes to go, the race seemed to be Muscle Milk’s despite the damage.

Fate intervened, in the form of an engine failure for the Delta Wing, which had overcome some early mechanical issues and was basically doing test laps during the race. The car lost power and rolled to a stop at pit in, and with 12 minutes left in the race, the yellow flag waved once more.

It took a ridiculously long ten minutes for the safety crew to move the stalled car, so the race went green with a lap to go; the green and white flags were waved simultaneously.

This was an odd decision by race management. There was actually enough time on the clock for two laps. In any case, Luhr made the most of the restart and opened a six-second gap over the Rebellion, crossing the finish line ahead for his record-setting 43 ALMS win.

Victory went not to the swiftest but to the most determined. After having won at Long Beach on strategy and the flawless riving of Klaus Graf, Muscle Milk won at Laguna Seca because of inspired driving by Lucas Luhr.

The race for the championship literally could not be closer. The win ties the top four drivers: Neel Jani and Nick Heidfeld of Rebellion, and Graf and Luhr of Muscle Milk, with forty points each.

With seven races left, the tally is two for Muscle Milk and one for Rebellion. The next race is the American Le Mans Northeast grand Prix at the tiny Lime Rock track. The Rebellion drivers have likely never raced on such a short track (1.5 miles) with so much traffic, while the Muscle Milk drivers have seasons of experience there.

Traffic is a huge factor at Lime Rock, and luck is also. The race promises to be one more exciting event in a season which has already offered up three excellent races.