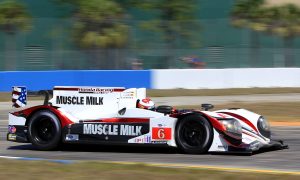 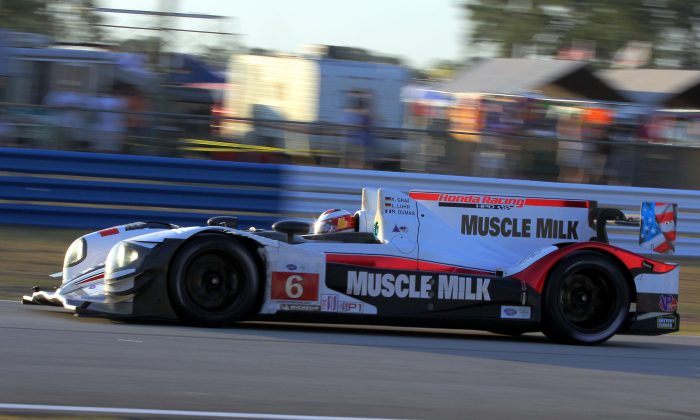 The third running of the American Le Mans Series Grand Prix of Baltimore was both a demonstration and refutation of Murphy’s Law: everything that could go wrong did, but everything else went so right the wrong parts didn’t much matter.

The race started with a massive low-speed (for racing) pileup which took out several cars. After a lengthy red flag to remove wreckage, the race restarted the field only made it to Turn Four before more collisions caused a full-course caution.

After a restart on lap nine, the race ran smoothly for 17 minutes, until lap 20, when another FCY was needed to pick up a BMW bumper and to reposition the front-straight tire chicane.

When all that was sorted out there were only 18 minutes of racing left, but those were some tough minutes. The drivers, frustrated by all the downtime, were revved up and racing hard, and the action was intense, but somehow, everyone managed to keep in t on the island and the race finished without incident.

Lucas Luhr and Klaus Graf in the #6 Muscle Milk Pickett racing HPD ARX-03a got their sixth win in seven races to clinch the 2103 P1 championship, but it was tight right to the end, with Guy Smith in the Dyson Lola right on Luhr’s wing until traffic gave Luhr a slight gap on the final lap.

Corvette pulled out a one-two finish in the GTE class, with BMW three and four. These cars fought hard from start to finish.

Dirk Müller, leading the fields in the #56 BMW RLL ZX4 on the final restart, had to check up when Ed Brown in the #02 ESM P2 machine tore up the tire chicane on the front straight. Jan Magnussen, third in class, passed both Müller and Tom Milner in the #4 Corvette, and even led the race for a couple laps as Luhr had some problems finding traction.

Teenage star Tristan Nunez got his first ALMS victory along with co-driver Charlie Shears in the #18 Performance Tech Oreca. Shears barely avoided the first-lap pile-up, actually coming to a stop with the car’s nose wedged under another car, but was able to continue. Nunez took over and worked his way up to third.

Class leader Colin Braun had to pit to let co-driver (and team owner) Jon Bennett drive the final four laps to meet the requisite time to score points, which dropped the car to third in class. Then, two laps from the finish, Dane Cameron suspension broke, letting Nunez by for the win.

GTC also went all the way to the wire, with Dion von Moltke in the #45 Flying Lizard Porsche getting his fourth ALMS win and team owner and co-driver getting his first in 88 starts. Von Moltke held off Jeroen Bleekemolen in the #22 AJR Porsche—quite the feat—and Bleekemolen barely finished ahead of a charging Jan Heylen in the #11 JDX entry.

Heylen, who wrecked very hard in the last race, pushed very hard in this one; his very forceful pass on Sean Edwards in the #30 Momo NGT Porsche with two laps to go was just this side of a penalty, but it got the JDX car on the podium.