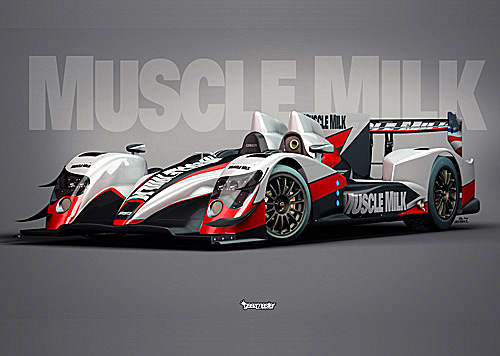 The team will also enter an Oreca-Chevrolet in the LMPC class, and there are rumors of a Nissan GTR in the GTD class. Only the Prototype and PC cars are confirmed to date.

“This is an exciting time for us at Muscle Milk Pickett Racing as we welcome Oreca as our new partner,” said team owner Greg Pickett in a press statement. “After winning the last two P1 Championships in the American Le Mans Series, it was important for us to choose a partner for our new adventure into the Tudor Championship, that can help us continue, and build on, the success we’ve known so far.”

Oreca (Organisation Exploitation Compétition Automobiles) is a worthy partner. Its cars have won more than 40 national and international titles, scoring more than 350 victories since its founding in 1973. Oreca’s cars have won both class and overall at the 24 Hours of Le Mans, and has a class win at the Rolex 24 at Daytona and class and overall wins at the Sebring 12 Hours, both races which will feature prominently on the 2014 TUSCC schedule.

Longtime Muscle Milk drivers Klaus Graf and Lucas Luhr will return to pilot the P-class Oreca. This pair has won two championships, 18 wins, 23 podiums and 13 poles in 28 races together for Muscle Milk. Luhr is the most successful driver in ALMS history with 49 career wins and six championships.

“I very much look forward to getting into the ORECA/Nissan prototype car. This combination has been the dominant package,” Luhr commented. “We looked very hard into what would be the best way to move forward for us and the ORECA 03 LM P2 with a Nissan engine was the one to have in the past and I’m pretty confident that it will be the same in the future. It has won many races and hopefully we can win many more.

“We did a lot of analysis in regards to what would be our preferred package to make us competitive. We looked at a lot of variables, what is important for Muscle Milk Pickett Racing, not only what we need as a team to perform but also in terms of marketing and reliability, so we really looked at a lot of different aspects of the package before we made this decision.”

The Oreca 03 has indeed dominated. Since hitting the track in 2011 the car has won 18 races in the World Endurance Championship and European Le Mans Series, including 10 of 13 races in 2013. Its 4.5-liter Nissan V8 motor has been the strongest and most reliable engine in the LMP2 class in both series.

The Tudor Sports Car Series 2014 season starts with the three-day Roar Before the Rolex 24 public test, Jan. 3–5, followed by the 2014 Rolex 24 at Daytona, Jan. 25–26. Tickets for both events are available through Daytona International Speedway website.